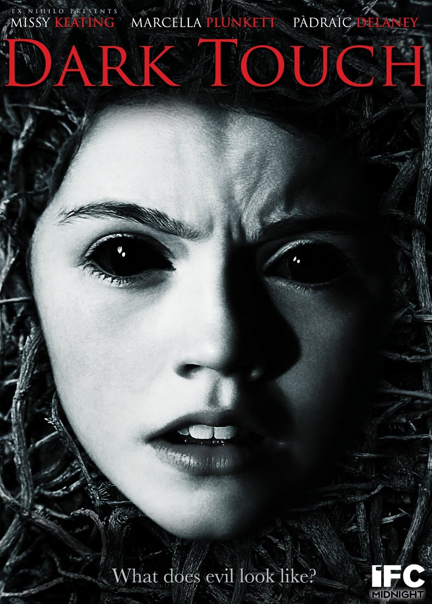 Okay, finally an Irish movie that doesn’t portray a ton of people standing in a field for no freaking reason at all. Dark Touch is a collaboration between Ireland and Sweden, too. Which is extra cool. Hooray for governments sponsoring art in their own ccountries!

Oh, and this movie was about 80 percent perfect. Ambiguity, portrayal of sane Irish people, no bad stereotypes in any of the characters… but then it had to devolve into classic American horror tropes. So close.

The gist: We open up in a small town in rural Ireland, which I would guess is in Offaly or Galway. Niamh (pronounced “neemph”) is a little girl that’s been through some sh*t. She’s recently had her entire family die in a fire, and the baby brother she tried to protect was accidentally killed in the event. She’s all shook up.

But weird things keep happening. Random earthquakes, things breaking, and a growing sense of dread around Niamh herself. She won’t let anyone touch her, barely speaks, runs away, and tearfully claims that she’s the one who killed her family… and the mother of two abused children she knew from school.

What I “learned”: A little while ago, I made the case for why challenging the “weird kid as villain” trope makes for much better movies than those that adopt it. It makes us question why certain people become social outcasts. If they’re made well, they also make us doubt our initial willingness to sympathize with them.

Initially, Niamh is an isolated weirdo. Her parents insist that she’s a bully to her younger brother, jealous of the attention he’s been getting. The neighbors Niamh ends up living with treat her with sympathy, and try their best to help her open up while trying to protect their own children and sanity. They’re shown as people genuinely doing their best. But what is Niamh doesn’t want that help? Does that make her or the neighbors necessarily “bad”?

See this movie if you like: Horror tackling a rather large, complicated issue. Not just child abuse, which is truly the “overarching theme” if there’s one to be found. I’m speaking of the limits of compassion. How long can this movie’s characters make excuses for Niamh’s antisocial behavior by saying “she’s been through a lot”? She does have moments of kindness and vulnerability at times. Is that enough?

I won’t lie, this movie has a very archetypical horror movie ending. They didn’t intend for us to leave the movie with ambiguous feelings toward Niamh. But it is in that initial ambiguity that the film thrives. It’s definitely not to be disregarded just because the ending is terrible.

Avoid this movie if: Your horror trigger is children in danger. Some people just cannot handle seeing children in danger, and I respect that. This movie is certainly violent, and that’s not to be ignored. But the scenes wherein children are threatened or openly suffering are some of the hardest to take. If this is a theme that genuinely bothers you, I’d stay away.