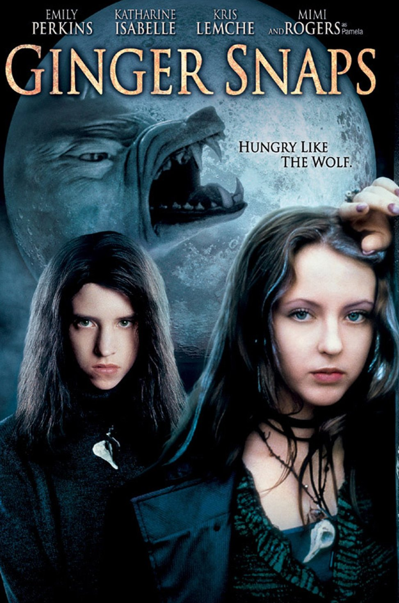 There’s a common theme in horror films: The plight of the weird kid. How they go about their lives, whether they’re really evil or not, and what (if anything) can make them “turn good.”

But what if “turning good” meant something was really wrong?

The gist: Ginger and Brigitte are sisters. They’re also way ahead of their time, being goth kids who smoke and conduct professional-looking photo shoots of themselves dying in different ways. Seriously, another decade and they would have been star Suicide Girls.

But anyway, Ginger gets her first period and also gets bitten by a werewolf right around the same time. Yes, I’m going to spoil it and say it’s a werewolf. It’s been billed as a werewolf movie all over the world.

Needless to say, she starts transforming into a wolf-woman thing. The effects are subtle, a little extra hair and a higher desire for sex. Ginger starts dressing more revealingly, and starts shunning her sister to smoke weed and have sex with boys. But soon she’s lashing out and becoming violent, and Brigitte’s faced with the task of saving her.

What I “learned”: Horror films really love weird kids. But so often, they allow them to become the villains. They can be misunderstood or even sympathetic, but in the end we’re still going to see them turn into the villain. So why bother trying to relate to them at all?

Trick r’ Treat might have been the first film I’ve seen in this entire challenge that lets the audience root for the weird kid. This may be the second, but even that’s not a clear distinction. Brigitte stays how she is, and doesn’t rip anyone to shreds. But she’s still codependent on Ginger, and unable to stick up for herself. Does that make her an acceptable heroine? Not really. But according to that logic, Ginger isn’t really so bad for wanting to branch out and try more stereotypical teenage activities. This movie challenges the trope of “the kid in black did it” and forces us to reconsider it from both directions.

See this movie if you like: Coming-of-age movies that try to do something different. Ginger and Brigitte are the weird kids in school who re-create bloody suicide scenes, but they’re relatively harmless. What’s interesting is how people react to Ginger right after she gets bitten. Once she starts acting more promiscuous and sociable, people accept her. In the eyes of her parents, she’s growing up. Becoming more normal. In fact, it’s only when she’s completely far gone does Ginger even consider curing herself. The appeal of fitting in is too seductive, even at the cost of herself.

Avoid this movie if: You can’t handle blood, especially blood that has to do with periods and “normal” body functions (i.e. cutting your finger). If I had to name only one distinct feature of Ginger Snaps, it’s how much it normalizes blood. It’s very clever about it. Just a little at first, just normal period stuff. Then before you know it, you’re sitting at the feet of your dead boyfriend lapping it up from a puddle. You don’t even know what happened.

One Response to 30 Movies in 30 Days: Ginger Snaps