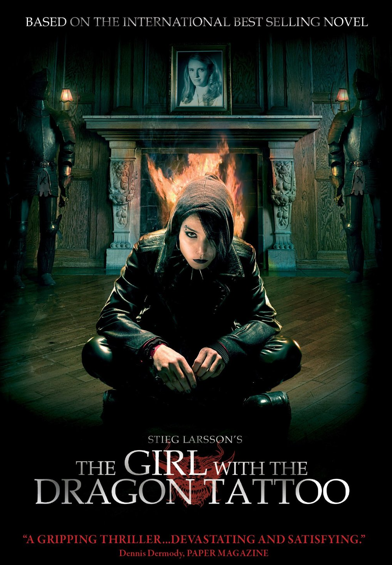 30 Movies in 30 Days: The Girl With the Dragon Tattoo

Just to clarify, this is the version of The Girl With The Dragon Tattoo that premiered as a made-for-TV movie in Sweden, not the American version starring James Bond. That one didn’t even go through the entire series, which was bogus.

No, this version of The Girl was the first filmed version of the best-selling Millenium series, and is considered by many to be the essential version. I have no problem with Daniel Craig playing the downtrodden journalist Mikael Blomkvist. But there’s some sort of secret sauce that’s activated whenever a Swedish guy plays a Swedish character.

The gist: Mikael Blomkvist is a journalist on the brink. He’s being sued for slander by the target of his latest investigative piece for his magazine, and is due to show up for a prison sentence in less than a year. He’s at a low point. Even his married girlfriend thinks so (Oh, Europe. There are affairs in all your movies).

Enter an anonymous rich guy, with a murder mystery he needs Blomkist to solve. The police have failed, and so he’s trusting the mystery of his favorite niece’s disappearance to this investigative reporter. Blomkvist accepts, but soon finds himself taunted on his apparently-sucky research by a hacker named Wasp. Surprise! It’s the titular Girl, formally Lisbeth Salander (by the tall and tough Noomi Rapace). She comes to help him out of fascination for this case, and the two uncover a conspiracy around the mysterious family of the anonymous rich guy (he doesn’t matter, I don’t care about his name). But Lisbeth’s battles go much deeper, and strike at the heart of her very freedom as a citizen.

What I “learned”: Man, films that show men being vulnerable are great. They’re just automatically more endearing than tough-guy movies. Mikael is clearly attracted to Lisbeth, and those moments of vulnerability are what make this movie really shine. It makes this movie seem more grounded, in spite of its out-there story. In spite of all the secret Nazis and messages sent through dried flowers (seriously), the moments of human vulnerability are what tie it all together. Less so, from Lisbeth, which is refreshing. But they still happen to everyone.

See this movie if you like: So-called female sociopaths. I don’t personally think Lisbeth is a sociopath, just a very troubled person who’s learned to keep her guard up at every turn. But these people are undoubtedly fun to study, and Rapace plays her in a very sympathetic manner. It’s fun to watch, because she’s one “crazy person” you can root for without guilt.

Avoid this movie if: Sexual violence bothers you. This movie became famous for its simulated rape scene, and you’d be remiss to skip it because it’s actually very important to Lisbeth’s character development. So this is a courtesy trigger warning to all those what get squeamish around that. There’s other, more consensual sex later in the movie. But that’s not what made this movie become controversial in America. Let’s be honest here.

One Response to 30 Movies in 30 Days: The Girl With the Dragon Tattoo