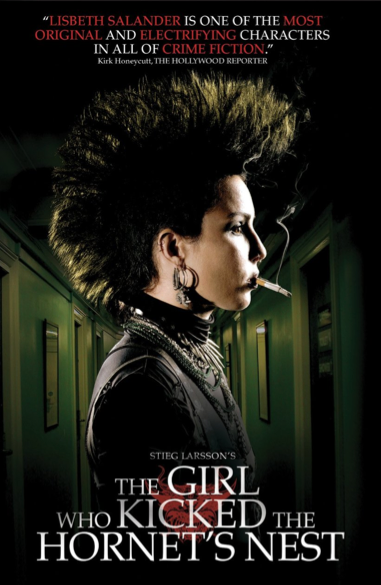 30 Movies in 30 Days: The Girl Who Kicked The Hornet’s Nest

After all the horrible nonsense that we’ve been through with Lisbeth Salander, we come to her final challenge. She’s on trial for multiple counts of murder, against her attacker and the people she was framed for killing in The Girl Who Played With Fire. The world has come to judge her. Her fate lies in the hands of four judges… against the psychiatrist who originally locked her away and declared her mentally incompetent.

The gist: Lisbeth comes out of a coma, because in the last movie she encountered some serious sh*t and was left for dead Kill Bill style. Lots of hacking, lots of tense scenes. But no lasting damage, miraculously.

All the while, Mikael Blomkvist is assimilating all the power he has as a journalist to prove she is innocent. In the meantime, people are trying to kill Lisbeth left and right. Why? Because her dad was a wicked mobster, and she tried to kill him in self-defense. Also, her troubled childhood could have been entirely prevented by the psychiatrist now testifying against her. But people can’t know about it.

What I “learned”: The best defense you have against evil people is evidence. The truth will out, as it always does. If you know you’re right, eventually people will see that. They will.

But, and this is hard to say as a woman, you often can’t depend on people siding with you just because you’re the victim in a situation. You need evidence that they explicitly did something wrong. Because victimizers are the kind of people who don’t stop doing awful things unless they’re stopped by the power of the entire system. So if you’ve been wronged, suit up. Gather the evidence, so you can nail down the people who wronged you for realsies. Do it Lisbeth style: Take video, and revel in your right-ness.

See this movie if you like: Courtroom drama, and Gone with the Wind-level shade being thrown. Lisbeth must have watched the film version of Gone, because she employs the same red-dress technique Scarlett uses to call out other people on their nonsense. People think she’s a punk, so she dresses like the biggest punk you’ve ever seen. And then she shows everyone up with a video of the sexual abuse her opposition has been denying ever happened. In the words of my watching companion, the lawyers were 20,000 leagues under a sea of butthurt. It’s glorious.

Avoid this movie if: You don’t find this story realistic. The Millenium trilogy has been criticized because of the consistent violence against women. Indeed, there’s a lot of violence against women portrayed in this film. Indeed, it’s crazy that so much happens to Lisbeth as an individual character. She’s tainted from early childhood tragedy, and seems set on a path of eternal destruction. Seems a little crazy, but if you look at Lisbeth as a compilation of women’s experiences, things make a lot more sense. Things are a lot easier to process that way. And knowing that, it makes this entire series more epic.