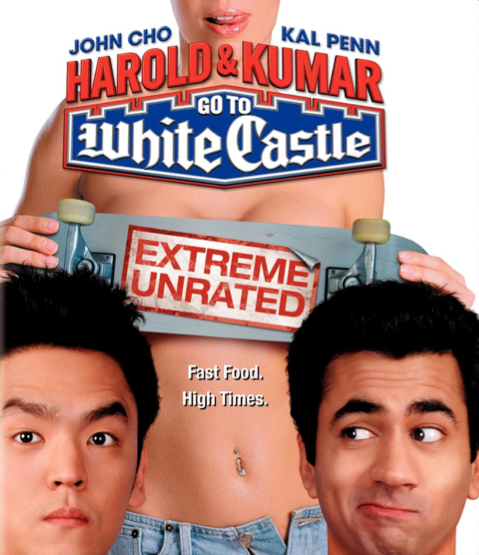 30 Movies in 30 Days: Harold and Kumar Go To White Castle

Okay, so I broke the “creepy movie” rule this time. Guilty. But watching this movie is 100% worth breaking a rule to see at home. Or in my case, watching it twice with a complete Harold and Kumar virgin (my dear boyfriend).

The gist: Harold (played by John Cho, who would later play Mr. Sulu) and Kumar (played by Kal Penn) are best friends. One stressful night, after toking up in their apartment, they get an intense craving for White Castle burgers.The quest to satiate this craving leads them to several dead ends, Princeton University, a hillbilly’s home/auto shop, a hungry cheetah, and even the local jail. Along the way, they confront personal issues about life, love, work, and what it means to live life on your own terms. Oh, and there are le-gen-dary cameos, including Neil Patrick Harris playing himself and Christopher Meloni as an insane auto mechanic with disgusting facial deformities. Oz fans will be shocked and entranced.

What I “learned”: Nothing about marijuana, first of all. There are tons of anti-drug folks that come down on this film because it portrays smokers in a positive light. Whatever.

This movie makes a lot of intelligent points about race, and what role stereotypes play in people’s lives. Harold and Kumar are constantly harassed by white people in the films, both blatant (“What are you gonna do, Mr. Miyagi?”) and subtle (being asked to do all the processing work for white coworkers). The two main characters react in opposite directions—Kumar shuns the idea of going into medicine because his immigrant father and brother both work in the field, and Harold resigns himself to hanging out with fellow Asian people even though he doesn’t care for their company. By the end of the film, they’ve each come away from their extreme stances and settled into a natural path. That’s beautiful.

See this movie if you like: Intelligent movies about friendship. So often these flicks verge into bromance flicks, with homophobic jokes throughout. While Harold and Kumar isn’t perfect (some slurs get thrown around as insults), the film portrays the friendship of the two main characters in a realistic and respectful way. Harold encourages Kumar to go after his ambitions, and stands up for himself when he feels too pulled away from his own. He doesn’t do anything to impress Kumar either, and thus earns his begrudging respect.

Avoid this movie if: You can’t deal with the drug element. I recently read Roger Ebert’s review of Fear and Loathing in Las Vegas from right when the movie came out, and it blew me away that certain people still have issues with movies that show no negative repercussions to doing drugs. The review was nuanced and wisely compared the film to the book, but still/This film shows stoners as narrow-minded, responsible, comic relief and level-headed. It depends on the individual. But other than extreme hijinks and occasional reckless driving, there’s no clear downside to doing drugs in Harold and Kumar’s universe (at least not in this movie in the series).

2 Responses to 30 Movies in 30 Days: Harold and Kumar Go To White Castle