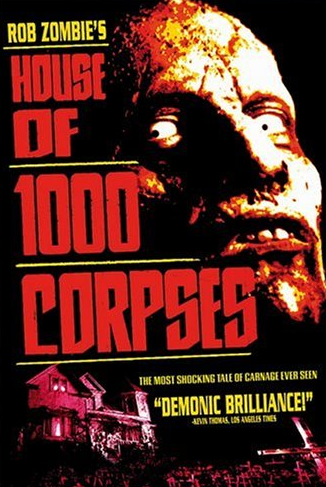 Another day closer to Halloween, another Rob Zombie movie. This one’s the prequel to The Devil’s Rejects, and it’s even more rough and pulpy than its eventual sequel would become. It’s definitely not as bloody, but if you can believe it, the imagery’s even more gruesome. And funny.

You also get to see the Firefly family in all their murderous glory in this film. There’s a peripheral legend about a child-torturer called Dr. Satan, but you don’t really care about him. The Fireflys are the stars. Murder is nothing to them. Bodily torture is standard. Psychological torture is a game. The only things sacred are family and celebrating Halloween. And it just so happens to be that dark holiday at the end of October…

What I “learned”: I no longer pity the victims of horror movies, because I’m finding that 9 times out of 10 they cause their own destruction. To use a cringe-y phrase, they bring it upon themselves.

Seriously, feck these so-called victims. If they’re impolite around clearly insane people, they know what will happen. Same if they insist upon knowing where Dr. Satan is buried, even though the clearly-crazy person running the Murder Museum says you shouldn’t check it out, you’re asking for it. The Fireflys are clearly twisted, but the group of teenagers don’t listen to the warnings befalling them. So yeah, no sympathy for those folks. Or any horror movie victims, unless they really are just random folks caught in a crossfire of hell and fury. I’ve seen that maybe five times ever.

See this movie if you like: Plays on horror tropes, especially those of the lost teenagers who require roadside assistance. These folks are writing a Lonely Planet-style guide to roadside attractions, which is why they feel the need to stop at the creepy murder museum that also doubles as a gas station. Their stories are more complex, so you’re more invested in what happens to them. You don’t feel forced to automatically root for them, as so many horror flicks often set themselves up.

Avoid this movie if: You’re not ready for vivid body horror. There’s quite a lot of it here, as well as lifelike torture images that you might see on the nightly news. There’s weird experimentation on people’s guts, but also victims of kidnapping tied up and cut in various places.

That’s great stuff for fans of the genre, because it means that the movie’s not just cartoonish and/or just terrifyingly realistic. But if you’re not a fan of body horror period, this will be an especially excruciating movie for you.