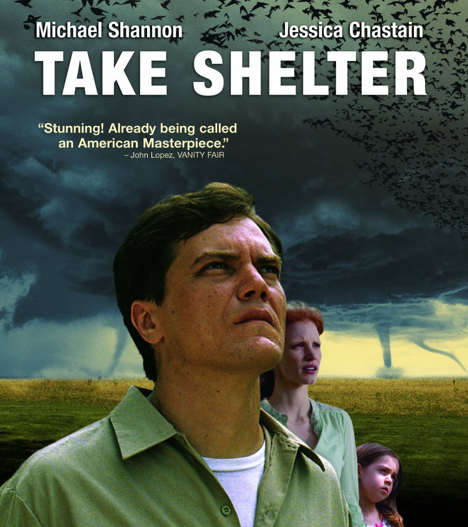 So you know when you meet someone new, and you want to like them but there’s something about them that just bugs you? And you can’t quite place it until an hour later, when you realize that they still haven’t stopped talking?

The gist: A good ol’ boy type, who notably works in construction, starts hallucinating visions of attacking dogs, swarms of birds, and cartoonishly scary storms. Even though he knows there’s a risk he’s becoming paranoid, like his mother currently living in a nursing home because of her mental illness. But he just can’t help himself, and starts prepping.

All fine and good. Prepping’s a pretty fun hobby. But when his paranoid projects start cutting into his family’s finances, things start heating up. People think he’s crazy. His wife (played by Jessica Chastain, at the beginning of her multi-tasking period) is livid that he’s throwing off their plans to vacation at the beach for once. Not to mention the fact that they have a deaf daughter up for a cochlear implant. That is, as long as he keeps his work insurance and doesn’t steal equipment to build a prepper-style shelter for a storm that may never come.

What I “learned”: I’ve long since scoffed at people who claim that horror and/or thriller movies have an ideal length. I hate the idea that a genre film isn’t allowed to be longer than 90 minutes. That seems a little demeaning to the genre. But this movie may turn me to that point of view. Why? It’s two freaking hours long.

I get that science fiction’s difficult to put on film. I get it. But man… You have two hours to make me care about this family, and you still can’t do it. That’s a horrible amount of time, because it isn’t enough time to illustrate the characters as you would in an independent movie. But for a disaster movie, it drags. For a descent-of-madness film, it’s a slog.

See this movie if you like: Stories about a person going crazy, starring a person you really don’t care about. So often movies about madness are upsetting because we hate to see a good person go loopy. If you like the descent-into-madness story but really don’t want to care about the main character (a la The Wicker Man), then this movie’s perfect for you. If I were a young and impressionable person, I may have written that problems are best dealt with by telling no one and yelling whenever anyone crosses you. Because sheeple be crazy, right?

Avoid this movie if: You like the movie’s original concept. Trust me, I love the idea of a is-he-crazy-or-isn’t-he story. And I personally would like to see more stories set in rural and poor areas. This movie has so much going for it. But it will break your heart. Go in not expecting a whole lot, and you’ll be happy.