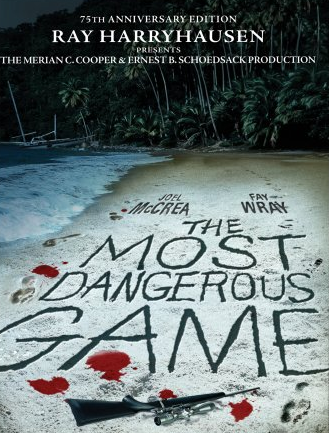 500 Movie Challenge: The Most Dangerous Game

We all probably read the book version of The Most Dangerous Game in high school. It’s a brilliant story based on the idea that people are the most dangerous animal on earth. Lord of the jungle mentality and all that. It’s influenced a bunch of things, and has been referenced in so many things. But this 1957 film messes with the formula in a laughably marketable way. It’s so great.

The gist: A young hunter is washed ashore on a mysterious island. This is 1957, so it’s perfectly acceptable for him to be a big game hunter. In fact, he’s written books about it. He’s kindof a big deal.

Fortunately, the person who owns the manor he finds on the island is a huge fan of his. He’s written everything the hunter has ever written about hunting, and speaks about hunting obsessively to his guests. Here’s where the movie changes things to be laughably marketable: Fay Wray and her co-star from King Kong just happen to be guests too. It’s 24 years later, they probably needed some work. But it’s revealed that their host is sick of animals and now hunts people! Time to ready your knives and get ready to run. It’s almost their turn to play.

What I “learned”: Again, this movie’s so short. Less than an hour and a half long! And yet the story’s so tight and dense. We punish ourselves by pushing movies to be too long. It’s not helping us anymore because now there’s no distinguishing between ordinary movies and epics. Not everything has to be epic. Sometimes you only need 62 minutes to tell  story about people being hunted for fun.

There’s a quote for which I haven’t found the source, but I find so relevant that I must pass it on. If anyone knows the source, please put it in the comments. I need to know who said these true words: When it comes to movies, you get 90 minutes for free. Everything after that, you have to earn.

See this movie if you like: Movies that involve a lot of talking an philosophizing, but ultimately aren’t very deep. I know people who really enjoy watching movies like 12 Angry Men or Dogma, but not because they’re fans of deep discussions of morals. It’s all about the conversations that take place. It’s the act of watching people probe other people, with all the subtext and unspoken rules that go along with that. They enjoy watching other people have meaningful conversations about stuff that matters. Say what you want about what that says about the quality of modern conversations today. But it’s a perfectly valid reason for watching a movie.

Avoid this movie if: You can’t stand action movies where there aren’t a lot of action. This isn’t to diss movies like Die Hard, where the lack of shoot ’em up action is exactly what makes it insightful and charming. I’m speaking of movies that are mostly buildup but very little action, i.e. Catching Fire. Except without the political intrigue. That’s what keeps us interested between stabbings.