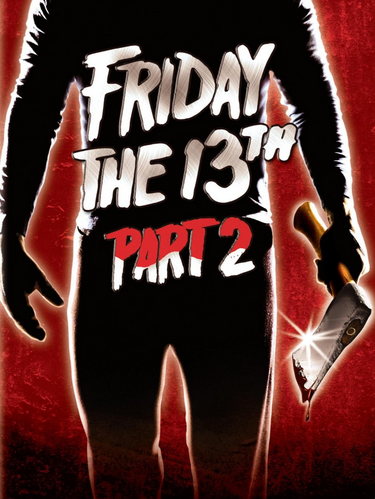 I meant what I said when I said that Saw was going to be the only horror franchise I was going to fully invest in. I meant that one hundred percent. But the Friday the 13th series is unique that the main killer actually doesn’t show themselves until the second movie in the series. So I’m making an exception to the rule. While Friday the 13th: Part 2  doesn’t show Jason with his signature hockey mask, it’s the first one showing him in all his creep-tacular glory.

Yes, I was disappointed in the mask not being there, too. Apparently it doesn’t make an appearance until Part 3. I’m sorry, but I don’t have that kind of patience.

The gist: In a genius move, Part 2 doesn’t actually take place back at Camp Chrystal Lake. That place is blocked off as if the plague originated there. Alice was tracked down and killed by a mysterious assailant. The Jason story is still floating around, even though it’s mostly devolved into legend. A new group of camp counselors feels safe enough to come to the lake.

The teens get into typical teen shenanigans, and things are actually pretty okay for a little while. But then someone’s dog goes missing. Then two of the counselor trainees decide to explore Camp Chrystal Lake just for kicks. As if that never ever proved to be asking for trouble in a horror movie. These bozos clearly didn’t know the rules yet.

What I “learned”: The best sequels have a very different tone than the original but still stick to what was great about that first film. It has to hit that perfect medium between iterative and original.

Besides this movie, the other film I’ve seen do this perfectly was Shrek 2. While the first Shrek was full of dry wit, the second had more outright jokes. The first film was notable for having beautiful animation and very nuanced textures. The second took the same attention to detail and used it to portray much gaudier, less naturalistic settings. Both these series (as well as Evil Dead) are master classes in how to make notable sequels. Glorious stuff.

See this movie if you like: A quintessential teen-driven horror film. Except way more lifelike than Nightmare on Elm Street. Darn it, there’s just no comparing these franchises. Those four years between them really meant a lot.

Avoid this movie if: You’re looking for the exact kind of film as Friday the 13th. This feels much more like a movie targeted toward teenagers, and everyone is a lot more chatty. There’s much less evaluation of the scenery. In fact, the the whole thing feels faster paced in general. There’s nothing wrong with this movie—as stated before, the different tone actually makes it a great sequel. But you won’t have the same slow-paced Deliverance-esque beauty of the original. It’s just not the same appeal.