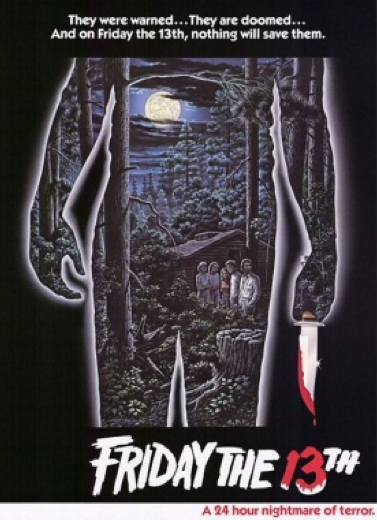 Okay, so we’ve covered Freddy, Leatherface, Nosferatu and Jigsaw so far in this Challenge. We have many more movies to go in this thing, but I thought it was high time we meet Jason.

Friday the 13th is right up there with Nightmare on Elm Street in regards to sequels, and in regards to debate over how badly this or that movie in the series sucks. I’m not here to argue with fellow horror fans, nor am I going to spend the entire Challenge obsessing over horror. But no tour of classic films would be complete without a trip to Camp Chrystal Lake. It’s just so lovely this time of year.

The gist: A bunch of camp counselors have shown up at Camp Chrystal Lake, a fairly big campsite set in the forests of New Jersey. There were a few murders there a few years ago, and like one drowning. Plus some weird natural disaster stuff. That’s no reason to close down a whole camp, right? Right.

So despite the warnings from townspeople, the counselors decide to revive the campsite. It’s a great piece of land, with a clear lake, cabins and even an archery range. Why not put it to use?  So a few dedicated counselors start refurbishing the place little by little, until one Friday the 13th. That’s when the main group of counselors show up. They’re ready to work, hang out, and party together. It’s the summer. Why not?

Strange thing, though—wasn’t that girl who was going to cook supposed to show up today? And it’s been a while since that one kid came back. But it’s all okay. It’s not like there’s someone out there stalking us in the woods, right?

What I “learned”: This movie is super underrated in the exact way that Texas Chainsaw Massacre is underrated. Both movies have the same care for cinematography and sense of place. These movie has no right to look this good, or be shot so well. I was getting ideas for how to decorate my backyard from these sets.

And I hate to admit, it, but this series may be the prettier sibling of Nightmare on Elm Street. Freddie had a more original premise, but Jason has the better-looking film. Actually, this movie may be better written as well. Aesthetic really does count in horror.

See this movie if you like: Horror movies that respect formula but aren’t boring. This movie’s the granddaddy of the slasher film, and it works because the story is natural within itself. Nothing is rushed. No one’s in a hurry to hit any beats. The people don’t feel like caricatures. They’re just people, fearing for their lives.

Avoid this movie if: You can’t stand gore. This movie’s pretty vicious on that front, and it can often come out of nowhere. Maybe it’s because this movie looks like Deliverance, but the blood in this flick can be pretty shocking. Skip this one if you’re the squeamish type.

One Response to 500 Movie Challenge: Friday the 13th