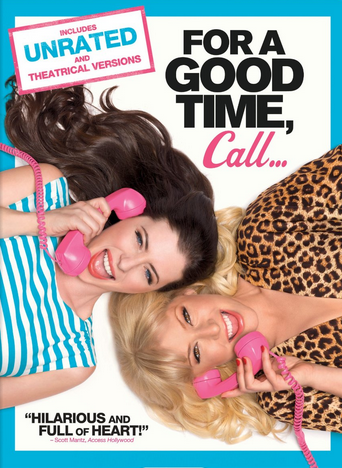 Dear Sex and The City,

You lied to us about what it would be like to be young and (hopefully) successful in the big city. Those of us who can actually afford to live there are hopelessly broke, working incredibly demanding jobs, and/or are living off our parents. This is not the fabulous life we were promised.

You are being demoted from your place as Idealistic Life Goal Movie For Young Women. We have decided to look in more realistic places, such as For A Good Time, Call….

The gist: This movie is way too funny to be based in reality, but it is. Lauren (played by Lauren Miller, who also wrote the movie) and Katie (played by Ari Graynor) are roommates. under duress. They hate each other. But Lauren’s boyfriend made her move out and Katie’s dreamy apartment is about to cost a lot more in rent. So together they go.

All is sorta fine, until Lauren discovers that one of Katie’s side jobs is as a phone sex operator. All fine and dandy. We’re sex-positive around these parts. But Katie’s barely making any money from her work. Since Lauren isn’t hearing back from her dream job, she decides to apply her business experience and help Katie start her own phone sex line. In exchange for less rent, of course. Soon the two ladies are rolling in money… and developing a friendship stronger than either one would have predicted. The only problem is, Lauren’s dream job is now calling back. Is risking a booming business (and a friendship) worth it if it means going legit?

What I “learned”: For a while, the biggest issue in television was whether or not the television show Girls portrayed Millenials accurately. I won’t get into it here, because I don’t really care enough to watch that show. I’m spending most of my time working and hanging out with my friends, like the two women in For A Good Time.

You write Millenials like you would people of any age group, but with an eye on certain issues. Lauren and Jesse talk about income disparity, hookup culture and whether or not someone should hold out for their dream job if the employer is stringing them along. That’s some serious Millenial stuff. But it’s couched in things that people of any age can relate to. Everyone runs out of toilet paper and everyone feels angry when someone breaks a promise to them. Millenials—they’re just like us! Just living through a horrible Recession.

See this movie if you like: Movies about sex that don’t take themselves too seriously. If I were to construct a double feature with this movie, I’d pair it with either Knocked Up or American Pie. All three use humor to discuss real hang-ups people have about sexuality. Plus, they’re just fun.

Avoid this movie if: You really do believe that Millenials are all entitled and obsessed with sex. Wouldn’t want to challenge that mindset, now would we?