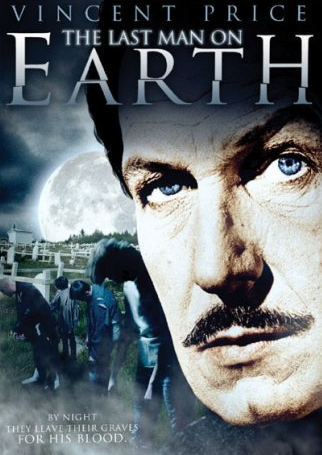 Vincent Price is fabulous. If you haven’t seen a movie with him in it, do so at your earliest convenience. He is a treat to watch and delightfully creepy. He’s also the exact person you’d want to see be the star of The Last Man on Earth. Because watching Vincent Price fight vampires is super funny.

The gist: One of the original adaptations of the story I am Legend, this movie take a much less flashy approach to storytelling than the 2007 remake. This take on the last man on earth is very melancholy. He’s a suburban dad who’s lost his entire family to the disease that’s turned everyone except him into monsters. There’s not many fun times to be had.

During the day, Vincent Price’s character drives around looking for supplies and disposing of the dead bodies that have come to litter his section of the world. They’re straight-up vampires, repelled by garlic and their own reflections. Vincent Price sees it as his duty to dispose of as many bodies as possible to contain the disease, which makes sense when you consider he’s a doctor. One of the very doctors who was looking to eradicate the vampiric disease. But it’s not enough. By night, they come to him. Vampires of all kinds, yelling at him to get out so they can make him one of them. Yelling his name into the night, tempting him to madness…

What I “learned”: Humans are so easy to sympathize with in disaster movies. That is, until they become despicable. Vincent Price plays a man we feel sorry for for most of the movie. He genuinely loved his wife and daughter, both of whom died from the disease. He had to dispose of them, just like every other monster he destroyed. Toward the end of the initial outbreak, his own colleagues started to suspect that they weren’t doing enough to help progress the search for a cure in time. Then, all of a sudden, he’s alone. That’s a heck of a person to sympathize with.

But then the moment comes where he actually may not be alone, and we see all the worst stereotypes of a sexist 1950s man emerge. And that’s how it seems to go in disaster movies: People either act like saints or devils. It’ll be an interesting part of the challenge to try to find a disaster movie that doesn’t fit that mold.

See this movie if you like: Contemplative movies about disasters. There are so many movies where things go wrong so quickly and no one stops to really feel the impact of it. There’s just not a lot of discussion about what happened, where we went wrong, and where we go from here. There’s not a lot of reflection, or even crying for those who we miss. The melancholia of Last Man on Earth is refreshing because the event that shattered the world years before is still present. There’s echoes of the event everywhere, from the still-burning pit where sick bodies were burned to the vampires moaning, “Robert… Robert…” outside the door. No one has forgotten what happened. No one can.

Avoid this movie if: You don’t like slow movies about disasters. I don’t imagine people who dislike The Walking Dead will much like movie, because the same things one could dislike about one can also be disliked in regards to the other. There’s a lot that feels like filler. There’s not a lot of exciting action. It may genuinely just not be up many people’s alleys.