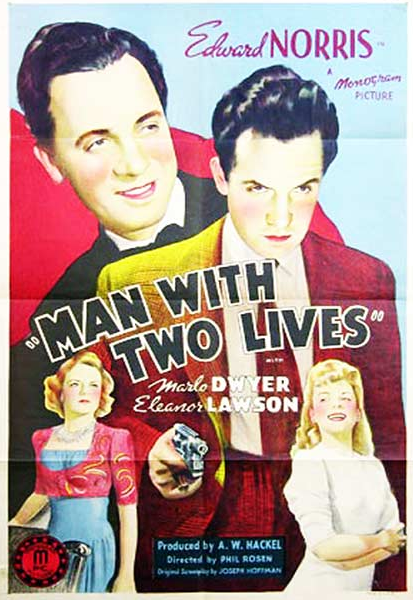 From World Worth Watching.

Oh my goodness, is there truly anything better than corny science fiction movies? I don’t think so. But Man With Two Lives is something different among these. There are also elements of gangster movies in this thing. Because corny science fiction movies aren’t enough—they have to have guns and gangsters too, darn it! That’s what you have to do to stay relevant nowadays!

The gist: This movie starts off basic enough. A young guy and gal are engaged. They both come from wealthy families, and are boring as heck. They’re hanging out with the guy’s dad and wealthy pals, when the guy leaves and get in a terrible car crash. He’s dead, by God! What to do?

Turns out there’s a scientist in the house, and he’s apparently been talking to the doctor from The Brain That Wouldn’t Die. I joke of course, because those two movies sharing a universe is too fun an idea to be true. But anyway, they zap the kid with electricity, and he comes back to life.

Problems are immediately presented, however. The guy doesn’t recognize his fiancee, choosing to spend more and more time out by himself than seems normal. His hoity-toity friends spot him in a seedier part of time, and they start worrying. Not about him, necessarily. More so about the company he’s keeping—isn’t that the girlfriend of the gangster just put to death by the state? The same night the guy was revived, actually. Might’ve been the same time, actually. But that has to be a coincidence. Right?

What I “learned”: I’m making it my mission to find more movies with unexpected gangster elements. Was this a trend at some point? Was there some studio executive that just loved gangsters, so they were stuck into every movie with a slightly offbeat premise? It seems like every time a movie from the 1930s or 1940s had a weird premise, gangsters had a small part in there. I smell a conspiracy.

See this movie if you like: Movies with ridiculous concepts that are actually taken seriously by the cast. Everyone is in this film with all the certainty and dedication that they would probably bring to a regular gangster movie. People are in it to win it. And you know what? There’s some actual eeriness in this movie at times. What a concept.

Avoid this movie if: This concept just boggles your mind, to the point where you want to throw things at the screen. It actually feels more plausible than the science of The Ape Man, because the characters at least admit that what’s happening is too bonkers to really be happening. So if you’re not the type to pardon something as “just movie science,” this may be one to skip. Otherwise, this might make a great companion piece to something else gloriously pulpy.