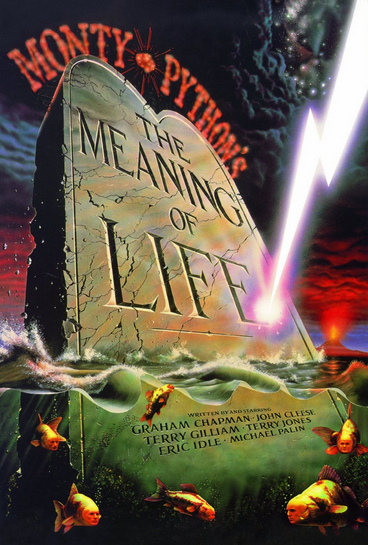 You want to know if you have cool parents? Determine at what precise age you saw The Meaning of Life. If it was before Age 18, you had awesome parents. You had a subtle understanding of humor that we who saw it post-18 years of age never had. Bugger all you people. I was not one of you.

You may think I am exaggerating about the place this movie holds in the minds of young nerds. I am not. I felt the same way listening to the Universe Song as I did when I rode a bike This was the barometer that told whether or not you had cool parents in college. It was a line that was drawn between the Nerds and the Basics. It said everything about how you grew up in the cultural lexicon. It was the ultimate decider of whether or not you had a Sense of Humor.

The gist: The plotline that runs through these sketches is very murky. It’s a basic quest for the meaning of life, represented through different ages. The members of the Monty Python troupe show the perks and challenges of being every age, dipping into the absurd frequently and often. Oh, and there’s lots of elderly pirates. And men in drag. And jokes about people who have lots of children, obey orders without question, attend dinner parties and take death too seriously. It’s all good fun.

What I “learned”: Effort usually makes for better viewing, even if a movie is bad. I’ve mentioned this idea several times in this blog series. But I’m beginning to think that it goes far beyond horror, and transcends whether or not a movie is even a “good” movie. If it’s clear that a ton of time and effort went into a movie, there’s going to be some group of people who love it. Art is best when it’s completely itself. Effort inspires. Hooray for people who put in an effort to make something incredible! We appreciate it.

See this movie if you like: Humor that just “exists.” This is a hard concept to explain, but the best way I can is to say that very few of these sketches feel like they’re being performed for an audience. The humor just happens while these actors are performing. Except for select moments where the fourth wall is broken, the actors are not in the least self-conscious. Those who love this concept will adore this movie.

Avoid this movie if: British comedy doesn’t really tickle your fancy. As a Monty Python fan, I’d recommend this movie for Americans just entering into the world of British comedy. It’s by far the most dynamic. Once you say, “It’s a collection of sketches,” a switch will flip in the heads of most Americans and they’ll be just fine. But the humor is very British. So it’s all a matter of taste.