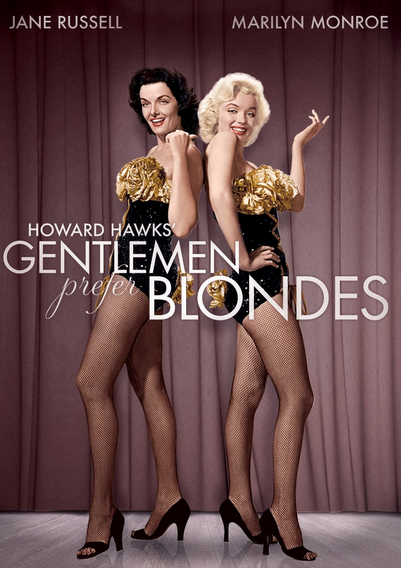 There’s musicals, and then there are musicals one can actually watch. Gentlemen Prefer Blondes is definitely one of the latter. I hadn’t seen it leading up to this Challenge, and I have no idea why. I’m a huge fan of Marilyn Monroe, and this is the movie responsible for “Diamonds are a Girl’s Best Friend.” But one can grow tired of Golden Age musicals, and desires something with a heftier script. It’s made me construct a new resolution to this Challenge: Musicals will not be chosen indiscriminately. If it’s not highly recommended, I’m not watching it. We don’t want a repeat of Funny Face.

The gist: It’s the matchup of the century: Jane Russell and Marilyn Monroe. And unlike Chicago, these top showgirls are best friends to the end. They compete over nothing, because they have completely different tastes. Jane Russell’s Dorothy is more of a woman we see today: Out for good-looking men who can show her a nice time. But her bestie Loralei (played by Marilyn Monroe) considers herself more practical. She wants someone who can take care of her, even if he’s not the best-looking one in the room. If she has diamonds of her own, she’s all set.

Naturally, Loralei finds herself plenty of gentlemen suitors. But when the one she plans to marry ditches her upon a cruise to France, she finds her eye wandering toward the most eligible bachelors on the ship. Dorothy’s on the prowl for someone from the Olympic team also aboard the trip, and is in no mood to play chaperone. But little do the ladies know that Loralei’s suitor is having them watched. Any inappropriate behavior may result in no ring for Loralei!

What I “learned”: Marilyn Monroe was an incredible actress. Jane Russell’s also amazing, but Marilyn Monroe had the challenge of making a flat character compelling to watch. As Loralei, she shows just how dedicated she is to making a scene work and letting a characters shine through her words. It’s a thrill to watch. Sure, she’s credited with being a sex symbol and all that, but it’s a tragedy that she’s not remembered for being as great of an actress as she was. She’s willing to invest fully in her part as a manhunting sexpot, which is worlds away from just stepping into the role.

That’s the main difference between a comedy filled with archetypes being bad or good. If people are willing to invest in their archetypes, playing them as sincerely as possible, there’s potential for truly funny moments. Marilyn Monroe is Loralei, and isn’t afraid to look silly in pursuit of the truth of that character. When the time comes for this manhunter to explain why it’s worth it to go after a rich man, there’s conviction in her words. Marilyn Monroe works very hard to find the truth behind Loralei’s actions, in spite of how ridiculous they may be. That’s what carries this fluffy movie.

See this movie if you like: Movies about courting and seduction that actually have interesting plots. Loralei and Dorothy actually are best friends, and you can believe it. This movie’s much more about that friendship than it ever is about their romances. These ladies care about each other. The actresses also feel heavily invested in keeping their characters consistent, which is always a treat in a “fluffy” musical like this.

Avoid this movie if: Musicals just aren’t your thing in general. There’s a fair amount of music in this film, and thankfully it’s all kept within a context (i.e Loralei and Dorothy performing in a club). But it’s still very much a musical. So be honest with yourself if it’s not fully your thing.