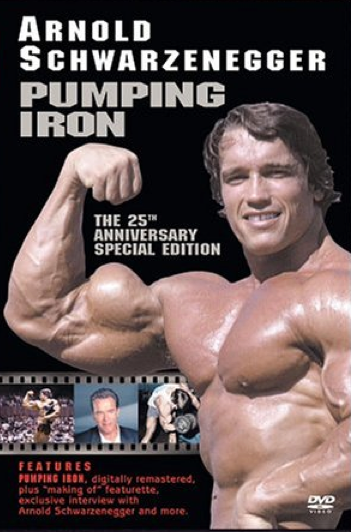 MOAR DOCUMENTARIES. But seriously, this one’s been on my list for a while. My uncle’s a bodybuilder, so I was curious to learn more about bodybuilding from people back in the high times of it all. Pumping Iron‘s a legendary documentary, and supposedly made Ol’ Schwarzenegger famous. Sounded like a good deal overall.

The gist: The movie tracks the training of three men with the same mission: Beat Arnold Schwarzenegger at the 1975 Mr. Olympia pageant. They’re all strong. They’re all cut.

What I “learned”: Success is not really a complicated concept. The amount of success you’ll eventually enjoy is directly tied to how much you’re willing to give up in the pursuit of it.

Lou Ferrigno is a young guy coming after Schwarzenegger’s title. He’s super tall, and clearly cut enough to maybe beat Arnold someday. But he’s still very young. He doesn’t know how to buckle down and want something bad enough to potentially look embarrassed doing it. He thinks he still has time. Compare him to Schwarzenegger, who tells a story about once throwing up in a gym in pursuit of a perfect set. There’s a clear difference in their dedication.

Side note: Ferrigno actually played The Hulk on TV and Hercules in a movie later on. Not the same as being a governor, but still pretty awesome! And, you know, less scandalous.

See this movie if you like: Documentaries about sports where you don’t have to be a fan to enjoy yourself. It’s a trademark of a good documentary: There has to be a balance of technical explanation and emotional depth. You need to know enough to care. But you may not be in the market to learn everything there is to learn about bodybuilding. There’s enough detail in Pumping Iron for us to follow along the story and know the stakes of every stage. The perfect amount, in other words.

Interestingly, Schwarzenegger is often used as the device through which we learn about bodybuilding. We literally go to the gym with him. It soon becomes clear why he’s the most famous professional among everyone the movie follows: He knows this thing back to front. He explains the concept of muscular symmetry in a way that even I could understand. Actual athletes will probably be able to relate even better.

Avoid this movie if: You want to walk away with any kind of faith in Arnold Schwarzenegger. I realized after finishing this flick that he was exactly the kind of athletic bully we used to see in 1980’s teen movies. He isn’t content to just beat everyone out for a title. He’s not above actively f*cking with them to win. He also isn’t shy about flaunting his victory in front of the other competitors.

I know he probably grew up a lot and was a different person by the time he became the governor of California. But still… I didn’t know bros like that actually existed. Kinda makes your head spin.