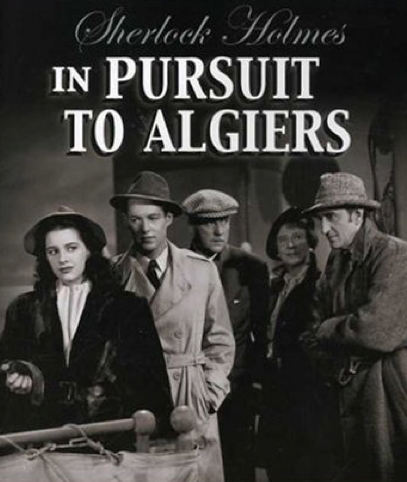 Did you know that there are a bunch of old-school Sherlock Holmes movies out there, just floating around in the public domain? I didn’t! So I had to get one in for the challenge. Pursuit to Algiers didn’t seem particularly special among all of them. But after Gentlemen Prefer Blondes, I figured continuing the cruise motif couldn’t do any harm. It’s not as if they’re glamorized in modern movies.

The gist: Sherlock Holmes is brought on board for a different kind of case: Transporting a member of a royal family safely. There’s no ostensible mystery here. The prince of a recently assassinated king needs to get back to his country safely, and Holmes is the only one they can trust to do it right.

With the help of the grumbling Watson, Holmes guards the young prince from every potential danger on the cruise ship bound to various cities. They’ll drop the prince off at Algiers, then continue on to the Mediterranean so they can have the vacation Holmes promised Watson. But not all is as it seems on this cruise ship. While not everyone may be after the prince, it seems that there are devilish deeds waiting to be uncovered in every corner.

What I “learned”: Sherlock Holmes is such a great character because he’s just too darn smart for the rest of us. We don’t have to try and solve the crimes he lays out. We bask in the fact that he’ll solve them for us, with entertaining wit and fancy.

With most other crime shows, it’s extraordinarily easy to sink into detective mode. We’re brought into the process of the investigators and detectives. At times, we may even witness the body being examined by the coroner. We become compelled to place mental bets on who did the deed. But when it comes to Sherlock Holmes, it’s impossible for us to know everything that’s in his head. We don’t know the reputation of the club Sheila’s traveling to, so we can’t possibly guess what it is that bothers her to be around Holmes. But he does, and so he guesses and is of course right. It’s not superhuman. It’s just knowing more than we the audience could ever know. This explains why Sherlock is such a popular show and Elementary is less so: The purpose of Sherlock Holmes stories isn’t to compel people to solve the mystery. It’s to entertain with the personality of Holmes himself. nothing wrong with all that.

See this movie if you like: A good compact mystery, with a resolute beginning and end. There’s lots of clues and shady characters in this one, with plenty of curveballs we couldn’t have expected as the audience. It’s a good time, and only 65 minutes. My prime recommendation is to watch it with any 12- or 13-year-old you know. At that age, you want something fun that tickles your brain but maybe not something that takes up your whole evening. Perfect.

Avoid this movie if: You’re used to Sherlock-era Sherlock Holmes. This Sherlock Holmes isn’t remotely sexy, and neither is Watson. They’re bumbling, fancy and adorably witty. It’s like watching Frasier Crane solve crimes. Good stuff! But modern fans should likely prepare for the differences they’ll find in the classic Holmes.