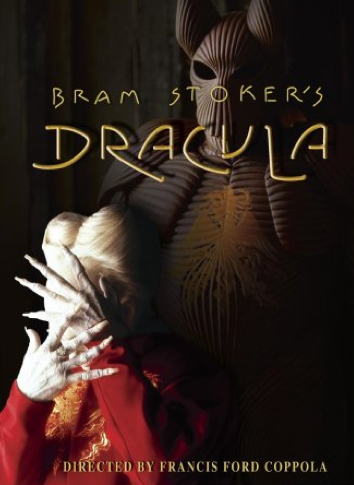 Sigh. I must take a moment to mourn this movie. Specifically, what Bram Stoker’s Dracula could have been.

It had so much going for it. It was made in 1992, an ear when people could be sexy as all heck on the big screen and it was great. It was the year of The Bodyguard and Basic Instinct. Probably not the best time for a movie based on a formative gothic horror novel. Especially one that doesn’t have a lot of inherently sexy elements.

But they attempted this movie anyway, original plot elements and all. It doesn’t lean far enough into the original book nor the cinema sexiness of the time. It is a disappointment.

The gist: The movie starts out pretty similar to the original Dracula novel. A solicitor named Jonathan Harker travels to Romania to facilitate a deal between his firm and the mysterious Count Dracula. But after facilitating the deal, he finds that he is slowly being trapped psychologically by Dracula. He can’t go home, and is always feeling watched by the Count and the three mysterious women in his harem.

Cut back to London, where Jonathan’s fiancee Mina is awaiting his return. She wants him, in that poised Victorian way. So cute. But her worldy-wise heiress friend Lucy comes down with a horrible illness, making her violent and enhancing the growth of her upper teeth. Could it have something to do with that dream Lucy had about being seduced by a bat-creature? Or those wolves that keep howling around London? Or that sexy-schmexy “prince” that keeps tempting Mina to stray from her strict Victorian path to be with him?

What I “learned”: Vampires are inherently sexy creatures. But we are afraid of making them fully sexy. Unlike Twilight, sexy-schmexy subplot to this movie is great. The idea of Mina being willingly seduced by Dracula is a great idea. It adds a new undertone to the original book, and makes it a lot edgier for new times. We want more of it. But it feels crowded out by the aspects of the Dracula legend that actually come from the book.

Don’t get me wrong, the original Dracula book is fantastic! But it does the book’s story no justice to be surrounded by much better filmed and choreographed sexy-schmexy stuff. Everyone feels robbed. It would have been better to have made an entire movie that was loyal to the original story, and then a year later come out with a sexy-schmexy companion film named Francis Ford Coppola’s Dracula. They would have been companion films, shown together on specialty nights at indie theaters. We could have had it all.

See this movie if you like: Long, sumptuous movies with barely any plot. I only joke lightly, because that’s the best you can do with this movie. It is so bloated yet so beautiful. If you need a movie for a sketching exercise, this is the one for you. The plot is completely useless.

Avoid this movie if: You like the story of Dracula, and are still waiting for the perfect movie portrayal of that book. I’m right there with you. I want that movie. This isn’t it.