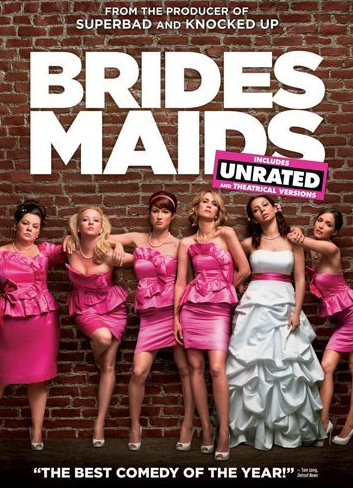 This is the year I am a bridesmaid for the first time. I felt it was my sworn duty to watch Bridesmaids because not only is it a “wedding movie,” it’s also a critical darling. That’s so rare for a wedding movie, especially one made in America. So I felt it deserved a place among these 500. It’s film education, people.

The gist: Annie has suffered some legitimately horrible setbacks lately. She’s an incredibly talented baker, but her self-started bakery crumbled in the Recession. With her bakery gone and her money completely lost, her boyfriend also left her. Now, an unknown amount of years later, she’s shagging a jerky guy on the side and rooming with the weirdest brother and sister ever.

But then Annie’s best friend gets engaged, which excites Annie and also terrifies her. Becoming maid of honor means she’s in charge of a random assortment of ladies ranging from delightful to positively toxic. The latter would be Helen, the wealthy wife of the groom’s husband who’s apparently butthurt that she’s not the maid of honor. Soon it’s an unofficial competition to see who’s the best friend of the bride. It sounds silly. But it wears down on Annie until she feels like absolute garbage despite her being the lifelong friend of the bride. It doesn’t feel like it matters in this new stage of her life, when she has already-married Helen as a new best friend.

Also, Melissa McCarthy’s in this movie as the only down-to-earth person other than the bride. She’s the critical darling, mostly because she’s the least femme bridesmaid of the bunch. It injects some realism into this rom-com setup. That’s gender politics, y’all.

Avoid this movie if: You get frustrated with “loser” protagonists. Annie definitely has issues that draw sympathy from the audience, but there are moments where you want to throw something at her and yell, Stop feeling so sorry for yourself! It’s great that people like her are being shown on film. It’s only true to form that the occasional Totally Set Back Stage of life (which I’m now convinced we all go through at some point) is talked about home. That doesn’t mean that someone out there will be justifiably frustrated with Annie.

One Response to 500 Movie Challenge: Bridesmaids