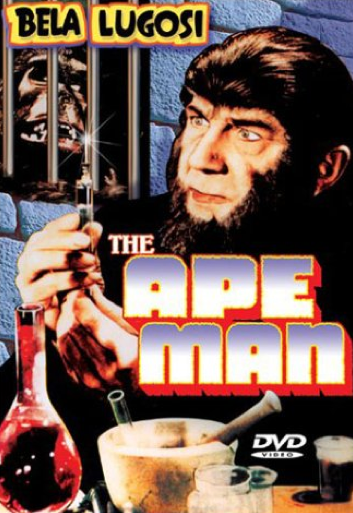 Bela Lugosi is one of those men that certain horror-loving women just thirst for. He was a super-sexy Dracula, and is just considered a classic babe of the genre. So of course, I am honor-bound to watch some of his movies for this challenge. Of course.

Unfortunately, it wasn’t in the cards for me to receive Dracula in time. So I had to settle for a movie he was in years later, a silly little thing called The Ape Man.

The gist: This is such a silly movie. Eccentric older lady Agatha Brewster is returning home from a long journey of hunting ghosts, and reporters want to interview her about her undoubtedly crazy ghost adventures. But her problems only start when she gets home, and she finds out her brother James (Bela Lugosi) has put himself in a crazy predicament. In experimenting with genetics, he’s turned himself into a half-man, half-ape monster.

He’s losing his humanity more and more ever day, and it’s terrifying him. But the only solution he can see involves draining the spinal fluid of a human being. James’s doctor friend won’t help him get it, because he realizes that murder would be required to obtain such a fluid. But is murder really that high of a price when it comes to preserving one’s own humanity?

What I “learned”: This movie brings up a stock character in horror that I also saw in The Pact and The Pact 2: The special woman who communicates with the dead. Who for some reason lives with her brother. Can we start using this character more, please? It’s fantastic. And it’s proof that sometimes the cheesy old horror movies really had the best ideas.

Seriously, Stevie is the best part of The Pact. And Agatha Brewster is no doubt one of the most interesting characters in this movie. She’s been off in Europe studying ghosts before this movie happens. For what purpose? Is she planning to write another book about them? How did she somehow end up with a phonograph recording of a Scottish ghost? Is her occupation the reason she’s unmarried, or why it’s not scandalous for her to travel on a ship by herself in 1943? I want to know more. In an otherwise generic black-and-white horror movie, the inclusion of this character stands out. We have to bring back the eccentric female psychic/medium/ghost hunter. That’d be a fun spin on a modern scream queen: Back to the beginning.

See this movie if you like: Classic horror movies that buy into their own stories. This movie’s definitely wrapped up in its universe, and it’s super fun. People are in this thing to do their thing. It’s a quick little jaunt into a world of classic Hollywood horror that we don’t see anymore, and is just superficial enough to keep us interested.

Avoid this movie if: You can’t handle cheesy horror movies. I know there are some diehard horror fans out there who can’t stand movies that don’t go for a true scare. They feel it’s dishonest. This movie has a lot of great ideas, and you get the feeling it influenced lots of people who went out and made movies of their own. But it’s definitely not a movie made to scare you. Weird you out, maybe. Compel you for sure. But scare you? Not at all.

One Response to 500 Movie Challenge: The Ape Man