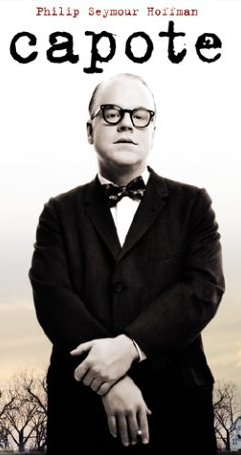 There’s something wonderful about movies about fame. It’s watching a snake eat its tail, sure. But it’s often only that snake that knows the nature of its tale. Only movies and operations powered by fame can really comment on it. And thankfully, there are more movies coming out in the past few years that aren’t afraid to criticize those who seek fame. As is said during one of the most wonderful lines of Capote, “I don’t see what all the fuss is about.”

The gist: Truman Capote, played by the late Philip Seymour Hoffman, has the world at his feet. He’s written Breakfast at Tiffany’s, he has famous friends, and he’s the life of every party he attends. But he becomes intrigued by a news story he comes across in the paper (coincidentally, this is often cited as a way for young reporters to track down interesting news stories they may further investigate). A Kansas family of four was shot dead by two men, and no one knows who did it.

Capote heads down to Kansas, set on writing up a story for the New Yorker about how such horrific murders are influencing the town. But it’s clear that there’s more to the story. Capote finds himself drawn to the two murderers, sending them books and arranging for them to find a new lawyer. And yet, Capote is horrified that he is drawn in by these two men. Should he really care about whether these two people live or die? And if he does, what is the worth of the celebrity-driven, New York litterati life he has created for himself?

What I “learned”: It’s so hard to know what to care about in this world, and what will benefit best from the investment in your time. Capote knew that he could have tried much harder to get the two murderers off, but he didn’t want to be tied to them and their welfare for the rest of his life. And why would he? He’s a writer, not a reporter. The world expected him to be a superficial writer about superficial things.

There is a fear that comes along with caring about things that we may not want to care about. We may not even expect ourselves to care about certain people or subjects until we do. But like Capote, it’s often satisfying to follow that interest wherever it leads us. You never what it may lead you to create.

See this movie if you like: Period films that are cynical about the period they represent. Part of me wonders if this film influenced the popularity of Mad Men, which premiered two years later. There is a crisp darkness to the 1950s and early 1960s in this movie. We can feel when Capote’s being fake, or when the two murderers are trying to look like tough greasers. There is emotion behind the suit and booze, and my bet is that it paved the way for the irreverent time capsules yet to come.

Avoid this movie if: Movies that romanticize big cities. This is definitely a city-versus-town kind of movie, and some people may take issue with the arrogant city folk. The judgements of both groups feel more even toward the end. But if you’re the type of person to yell at Sex and the City for being unrealistic, you may also be frustrated with this film.