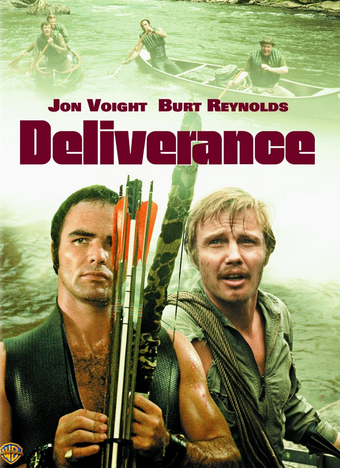 This movie’s another one of those that was recommended to me for years. It was just there, lurking at the back of my Recommended list. Of course, people usually referenced the infamous rape scene when mentioning the movie (which I personally think didn’t go too far). But Deliverance is genuinely a movie of its time, and I’d recommend it to anyone looking for an unconventional drama.

The gist: Four friends—Lewis, Ed, Bobby and Drew—are trekking down a river in Georgia,because it will not be there in another year. The entire area’s going to be flooded as part of a land development project, so this may be the last time any of them may be able to see these big woods. So why not make it a dudes-only camping trip down the riverbank?

It’s all good fun, until Bobby and Ed get separated from the pack. They go off hiking alone, and encounter two mountain men that corner them on a distant hill. By mountain men, I mean scary-looking hillbilly folks with shotguns and broken teeth. They tip up Ed and get to work on Bobby, making the robust man get on his knees and squeal like a pig.

But bro-ship prevails, and Lewis shoots the rapist hillbilly with an arrow. Drew chases the other one away, letting him escape. So now the four friends are left with the dead body of the hillbilly that raped Bobby. Should they turn themselves in, or hide the body? They each have careers and families. But they’ll have to live with the fact that they’ve now killed a man. A man that may have several relatives coming after them if they don’t act.

What I “learned”: There’s an idea that’s been going around in liberal feminist circles over the last few years called toxic masculinity. People debate if it exists, and if it exists if it is really as much of an urgent problem as people think. So it goes. But the jist of it is that the concept of a hyper-masculine ideal can only hurt men and lead them to ruin. It plays upon the worst stereotypes of manly men: Ones who boss women around, those who bully other men, and reject any responsibility. It is the idea of stereotype as corrupter. And I can’t think of a better argument for it than Deliverance.

Everyone starts out silently worshiping Lewis, the most stereotypically manly out of all of them. He knows the land, he marches ahead even when it’s unclear, and he mocks the other men for their conventional lives. He is Davy Crockett. But his suggestions become more and more risky, and the men find themselves doing increasingly stupid and immoral actions under his command. It’s not the body count that matters most here—it’s the destruction of the personal moral codes of each of these friends. By buying into the beliefs of their most masculine friend, they compromise the strength of their own inner voices. By listening to the voice of stereotypical masculinity, they lose themselves. That’s better than any academic argument for the existence of toxic masculinity I’ve ever seen.

See this movie if you like: Unconventional movies about friendship. If I had to describe this movie in a sentence, it would be “Stand By Me with adults and more violence.” The friendship between these four men is front and center. There’s wilderness and unexpected enemies, but it’s really all about these four. And it’s surprisingly realistic to the reactions one may have if, say, they saw their friend being raped in the woods by sketch-looking dudes.

Avoid this movie if: You expect these men to learn anything from being d*cks on a river. This isn’t a morality play, so don’t expect as much. I won’t spoil the ending for folks looking to see this film, but it’s not as neat and tidy an ending as you might expect. No one’s galloping into the sunset on this one. There are no heroes. It’s just men trying to live with what they and haven’t done for their friends.