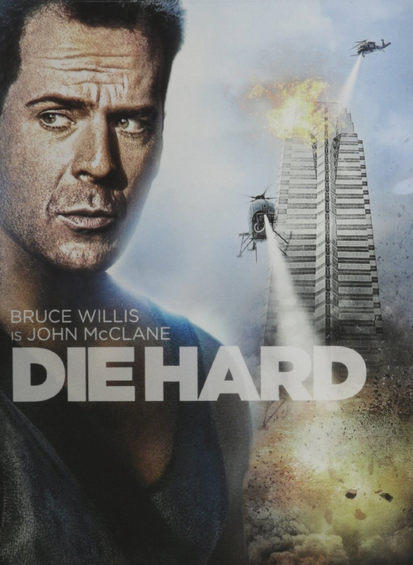 The man, the myth, and the classic. Die Hard is the action movie recommended above all action movies. Every man I have ever met that loves movies love Die Hard. It is the Dude Movie above all.

So imagine my surprise when I put on this movie and watched a dude get vulnerable and have a Feminist awakening for two hours.

The gist: John McClane is a NYPD police officer, and he is in Los Angeles for a Christmas party. It’s all corporate types, but he’s there mostly for his wife. He barely sees her anymore, since she moved out here to pursue a great opportunity with her company. He’s staying in New York because he’s pouty about her taking it. They’re not in a good place right now.

But all that doesn’t matter when a group of terrorists in suits storm into the building and take the entire Christmas party hostage. They claim that the company is corrupt, and they will start killing people unless some of their freedom fighter buddies are freed in their respective countries. Phone lines are cut. They’re on one of the top floors of a skyscraper. No one in the outside world knows that anything is wrong.

But thankfully for everyone at the party, none of the terrorists know that a tough NYPD cop is hiding in the bathroom. Or that he’s trying to save them all.

What I “learned”: When did action heroes start to become invincible? When was it required that they be so? John McClane is incredibly fallible, and that’s what makes this movie so great. Our action hero in this movie crawls across broken glass and grunts while doing so. He’s happy as all get out when he finds a safe space behind a desk to chill out and rest. He wants to talk to his wife at one moment because he realizes he never supported her getting her big break like how she supported him in his career. John McClane is an action hero not because he wants to shoot people, but because he won’t hesitate to shoot people if he needs to do so to protect people. That’s a far more relatable state of mind than that of a gung-ho killer. Maybe that’s why this one’s a classic.

See this movie if you like: A different kind of action hero. Not trying to be a broken record, but I think we’re all a little tired of the impossibly buff white dudes conquering everything they see on the screen. This dude’s white and buff but also slowly becomes more naked as the movie goes on because he’s trying to DIY weapon slings and bandages for his injured body. I recommend this movie if you’re a fan of the early Bourne Identity films. You know, back when Jason was clueless and a little adorable.

Avoid this movie if: You don’t care at all for police procedural content of any kind. There is a lot of police involvement once they finally come around and see what’s going on. John McClane has to deal with them and their limits, and there is a Sympathetic Cop character that gets a fair amount of screen time. If you’re the type of action fan who’d rather see the cops rush in at the end to arrest the bad guy at last, skip this one.