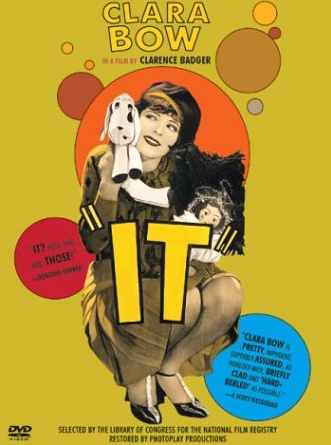 You may not have heard of this silent movie. But it’s more influential than you may think. This movie gave birth to the concept of the “It girl,” i.e. a woman typically working in fashion who has such an iconic look that she gradually becomes the muse for the industry at large. That came from this movie.

But being a silent film, it’s a little harder to track down than most. Thankfully, the DVD section of Netflix has a copy available. Huzzah for Netflix! Now we can all watch obscure stuff whenever we want.

The gist: Clara Bow plays Betty Lou, the flappiest flapper that ever lived. She has a day job, but decides at one glance that she wants to seduce her handsome young boss. So she begins her seduction routine, dating his friend, trying to catch his eye, and eventually playing hard to get. It’s all staged, and surprisingly modern. But a wrench is thrown into her plan when she lies about being an unwed mother to protect her friend from losing her baby. It’s the 1920’s—having a baby is suicide for an unmarried girl trying to climb the society ladder. How will Betty Lou get the sugar daddy of her dreams now?

The movie’s title comes from an article that the more moneyed characters read in earnest, an essay about the concept of “It.” It’s utterly indescribable, except for that you know what “It” is when you see it. It’s a confidence that comes from nowhere, and a self-assurance that can come from nothing. You could walk into a fancy restaurant wearing the most ragamuffin-chic dress and know that you’re the most gorgeous girl in the room. Betty Lou has “It,” all right. Plus an added dose of “haters gonna hate.”

What I “learned”: The TV show Girls could really learn from this movie. In spite of the decades between them, the concept of “It” still exists in the American imagination. Particularly with young women—we want to have “It,” and so we try to envelop ourselves in it. We want the respect and sex appeal that comes with being highly magnetic. The appeal of being that has never gone away.

See this movie if you like: Movies from the 1920s (or any set era) that don’t feel like they’re set completely in the time at hand. This movie doesn’t exoticize the 1920s, just some of the people in the era. It’s easy to see someone remaking this film in the 2010s with a title like Attractive Qualities. It’s a story that happened to be filmed in a bygone era. Even if the amusement park rides are more dangerous and the social workers speak in a backwards manner, it’s still something that could be filmed today. Easily.

Avoid this movie if: You can’t stand Girls, or any portrayal of twenty-something women where they’re supposed to be seductive and charming. I don’t mean this as a joke. Sometimes it’s really annoying to watch twentysomething women attempting to be cute and charming. Especially when they’re playing “the game” of dating. If you’re sick of these stories, this movie certainly won’t tickle your fancy.