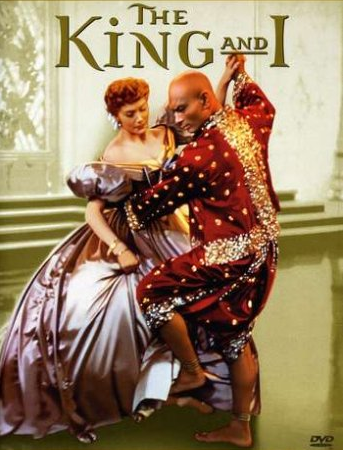 500 Movie Challenge: The King and I

People have asked me what “white culture” really is in America, and my answer has always included Rodgers and Hammerstein. Between their musicals and A Prairie Home Companion, you learn pretty much all you need to know about contemporary white culture. And The King and I is at the top of this culturally significant list.

The gist: Anna is a generic Proper English Woman, hired to come to Siam (now called Thailand) to come and teach the children of the King about English customs. But the King (played with incredible force by Yul Brynner) has other plans, including having Anna teach his wives and live in the palace with her young son. He also takes advantage of her position by asking for diplomatic advice, particularly about the encroaching British Empire. He must prove to the world that he is not a “barbarian,” and Anna is there to help him do it. But she becomes ever more conflicted when she sees how the King behaves around his subjects, including a “gifted woman” from Burma who longs for a young man from her own country. Then there was that moment where the King asked Anna to show him how to dance like a European and ended up sweeping her off her feet.

What I “learned”: The first time I saw anything to do with The King and I was at a theatre festival in Oregon. White people everywhere, and I started fearing that the cast was going to entirely be white people in yellowface. It wasn’t, thank goodness. There were probably less than ten people cast as Asian folks when they were clearly not Asian.

Because that production wasn’t overtly racist, I felt that I could enjoy that production. The King and I is a beautiful musical, with some genuinely deep points. But there’s still that nagging feeling in the back of my head, asking, “Is this racist?” The answer is: Probably. But maybe all we can do in this day and age is acknowledge the niceness of the music, and cast it as properly as we can.

See this movie if you like: Musicals that aren’t all about white people doing things in jaunty hats. This movie is full of people playing a different race than themselves, which is horrible and shouldn’t be practiced in a world where people of all races come to Hollywood. But there are no slap-happy actors trying to make it in Hollywood or seduce away the mobster’s girlfriend. There’s blatant discussion about polygamy, education and modernization. That’s some heavy stuff from the descendants of Tin Pan Alley.

Avoid this movie if: The incorrect racial casting genuinely prevents you from enjoying it. No judging on my part, because I know that the practice of casting people of one race as those of another is genuinely f*cked up. Also, there are plenty of musicals that seem overly flowery. If you don’t like musicals with songs that directly lead influence plot, The King and I may feel like a waste of your time.

One Response to 500 Movie Challenge: The King and I