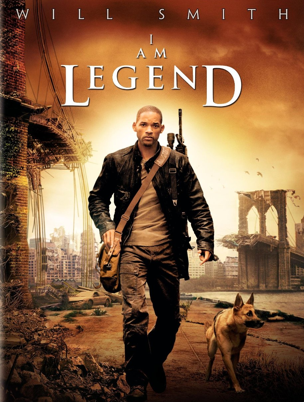 500 Movie Challenge: I Am Legend

From one vampire film to another! Yes, the monsters in I Am Legend are vampires. Quit kidding yourself.

The gist: Will Smith plays a standard Last Man On Earth, except he’s awesome and slightly crazy. I don’t want to spoil everything, but this Last Man on Earth is also a scientist. He’s a marooned army colonel who decided to stay in the quarantined Manhattan so as to work on a cure for the vampire-zombie virus. He refers to the place as “Ground Zero,” which was lost on probably zero people watching this in the theater.

For two-thirds of the film, we watch Will Smith go insane. He shoots a lot of vampire-zombies, but he also talks way too much to his dog. He sets up shopping mannequins in lifelike places so he can pretend to have human interactions. He even records and re-watches news reports from when the virus first spread. It was supposed to be a cure for cancer. Miracle drugs mutate quickly, apparently.

That’s the bulk of the film, and it’s fascinating. It also makes the last third of the movie all the more dramatic… there are other people around. A young woman and a little boy find Will Smith, because he’s been smart enough to broadcast his location every day (#foreveralone). He can’t deal with having people around, especially those who talk about colonies of survivors. He just can’t deal. He has work to do instead.

What I “learned”: There are a few movies that are okay to like just because of how nice they look. The Thief and the Cobbler is one of those films, and I’m convinced that this film is the same way. The story of I Am Legend isn’t very complex. I honestly don’t think it needs to be. We’ve been saturated by enough apocalypse stories in the 2000’s that we don’t need much of a background story. I’d be willing to say that this film paved the way for zombie stories to be more complex than we originally planned for them, to be, however. I can’t imagine The Last of Us existing without this film coming first. Same with both Walking Dead incarnations. This film captured a different side of the apocalypse we hadn’t much discussed in our most recent takes: The loneliness. I’d be willing to bet that this particularly lovely take on the idea resonated very far.

See this movie if you like: “Longer” movies that actually feel well-paced. As a fan of The Last of Us, I really appreciated the time this movie took to establish the look of the world. Manhattan Island’s completely overgrown, but there are also wild animals just hanging out and doing their thing. Nature won, and it looks gorgeous. I was surprised to look down at the DVD player and see that an hour had passed while I was watching Will Smith just go about his day. It feels comfortable.

Avoid this movie if: You’ve read the book. Honestly, I enjoyed the movie because I’ve never read the book. But what what I’ve gathered, there are enough differences that people who love the book abhor the movie. So do yourself a favor, and stay protected. Otherwise, it’s a beautifully made zombie movie that I have no problem recommending to most folks. Even thought they’re really vampires.

One Response to 500 Movie Challenge: I Am Legend