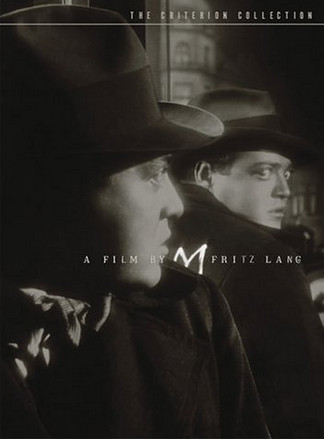 Time to revert back to the classics. M has been recommended to me for going on a decade. It’s a thriller, centered around a serial killer. It’s an old movie, but I didn’t expect to be shocked.

The gist: M opens with a city living in fear. I’ve read after watching this movie that it’s set in Berlin, but the city feels so much smaller and tightly knit. Everyone’s scared for each other, because there’s a murderer on the loose. It’s a serial killer, who specifically preys upon little girls.

The police don’t have a clue, and we witness them searching forests and rivers for any indicator as to who this person may be. Everyone’s jumpy. Anyone who offers to help a child get home is harassed by passerby. But most angry of all are the ordinary criminals. Think thieves, pimps and extortionists. This guy’s increasing the police presence in the city, and even they won’t begrudge someone who kills children. So the crime bosses come up with a little search party of their own: Homeless people.

The murderer himself (played with Pedobear brilliance by Peter Lorre) is twitching to steal another child. But one of the homeless guys on the crime bosses’ payroll hears the special tune he whistles. He alerts a low-level criminal, who brands him with the letter “M” in chalk. He’s been marked. The city has their murderer. Time to hunt his a*s down.

What I “learned”: I hate using this word, but it’s unavoidable: When it comes to crime movies in the 2010s, we are pussies.

In our fervent desire to make movies about charming psychopaths and boxes of bloody execution, we forget what crimes in the real world really look like. We forget that the victims of those crimes had families. It’s not just hard-boiled detectives who can be haunted by crimes. When the bodies have been wrapped up and the bad guy’s in jail, there are still mothers who tell their daughters not to go out at night for fear they’ll get “snatched.”

M is a scary movie because people really act like they’re frightened. Not a sanitized crime-movie frightened, where they buy a gun and prowl around menacingly. These people are really frightened by this lurker who doesn’t sleep. They feel helpless. As a result, the movie is more effective than any crime movie I’ve seen in a long time. Apparently no one has the cahones to make a movie that tells a somewhat realistic movie about killin’ folks.

See this movie if you like: Movies that are about crime itself, as opposed to detectives solving crimes. The police force plays a very small role as the events of the crime spree unfold. You don’t even care about the cops. You’re most curious about whether that little girl is going to make it home okay. It’s more important that the “innocent” criminals get out in one piece. You’re watching the investigation as if it were a sporting event, the city versus this slippery character. The hunt is on.

Avoid this movie if: You’re not a fan of movies where the city is a character in and of itself. It can come off as really pretentious to some people, and this movie definitely uses the device. It’s nowhere near as irritating as From Rome With Love. But if the whole concept strikes you as tired, this movie will annoy you beyond measure.