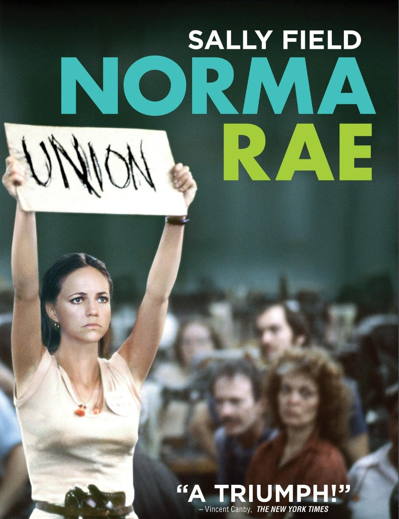 This may be the most Millenial thing I’ve ever said in my life so far, but… who knew Forrest Gump’s mom was such a bada*s?!

Seriously, I had no idea Sally Field was as iconic as she is. And it’s really nice to see her in the first film after Sybil that really launched her. Plus anyone that’s willing to play mothers, even early on in their career, gets a boost in my book. There’s nothing wrong with playing motherhood with complexity, and Sally Field does it again here.

The gist: Norma Rae is a worker in a textile mill, along with her parents and most of her community. Black people, white people, everyone. But her world is rocked when a union organizer comes to her small South Carolina town. Everything that’s ever worried her about working at the mill is suddenly thrown into stark relief. Are her worries really unfounded? Maybe not. In fact, forming a union the only way to make things better for the future.

What I “learned”: The principle of astroturfing really doesn’t work when it comes to social change, both in its old forms and its new ones. Today, people can look up connections between companies on the Internet. Back in the 60s and 70s, people could just ask around. But when it comes down to it, people don’t trust outsiders to take care of their own business and work on their behalf.

While it helped that Norma Rae was first introduced to the idea of a union by a Jewish man from New York, the union truly could not have been set up without her. It takes someone speaking the language of the people at hand to really make any progress. The scene where Norma Rae is handing out fliers containing union information to everyone while calling them by name is one of the best in the film. She knows exactly what she’s doing. She knows exactly what their worries are regarding a union. And because she can speak to those worries, she is effective in what she has to say.

See this movie if you like: Biopics that aren’t afraid to get really ugly with who people really were. The woman who inspired Norma Rae’s character, Crystal Lee Sutton, was an equally complicated figure as the fictional Norma Rae. They have children out of wedlock, work at minimum-wage jobs and aren’t the most refined of people. That is very much reflected in this film, where kitchens are tiny and clothes are continuously dirty. This film doesn’t flinch when showing what the conditions of the working poor in north Carolina may have been in the 1970s. Even racial tensions in the integrated factory aren’t left out. This definitely set the tone for the gritty biopic in a good way.

Avoid this movie if: You want an action-filled biopic. This movie is incredibly slow, and the scene where Norma holds up the UNION sign and rallies people to vote for a union doesn’t happen until well into the second half. You have to be committed until then, and it can be slow going at times. So as long as you’re in it for the long haul, you’ll be rewarded with plot. But this movie’s brilliant in the atmosphere it creates.