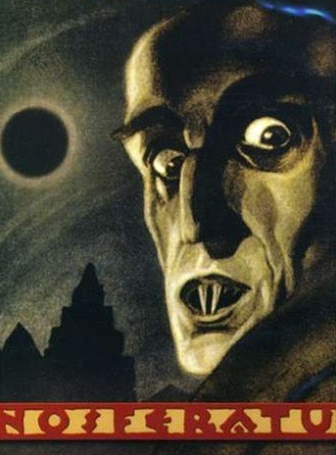 Just to prevent confusion, I saw the version of Nosferatu that came out in 1929, starred Max Schreck and is now officially in the public domain. There are a few different versions available, so I don’t want there to be any mistake. This is the silent version. This is the mack daddy vampire movie.

The gist: If you’re at all familiar with the story of Dracula, you’ll know what happens in this movie. In fact, there was a huge lawsuit from the family of Bram Stoke toward the makers of this movie because it’s basically the same story with different names. A few characters and subplots are also combined.

It goes like this: A young man thinks he can score a big real estate bonus by convincing a Transylvania count to move to his small village in Vienna. After seeing a photo of the realtor’s wife, the count agrees. But he soon turns out to be mega-creepy, sleepy with his eyes open in the daytime. In a coffin! So the realtor escapes, trying to warn the village of what will soon be their fate.

However, the count is on the move as well. And in his Nosferatu form, he is swift. He soon kills everyone on the ship bringing him (and caskets of plague-infested dirt) to Vienna. The realtor’s wife is going insane in the meantime, sleepwalking and calling out in the night. By the time the realtor is back to his village and fully healthy, it’s too late. The village has been overcome by plague. And his wife is ready and willing to succumb to Nosferatu.

What I “learned”: Whoever said vampires were originally scary and not sexy is out of their minds. Nosferatu may not be sexy, but he is certain sexual. The images of his shadow paralyzing the realtor’s wife, and especially sneaking into her room, are positively dirty. So can we give up the guise? No matter how ugly you make a vampire, no matter how scary they may appear at times, they’re always going to be tied to sex. They have to bite your skin to feast themselves upon your vital fluids, for Pete’s sake.

See this movie if you like: Horror movies with excellent music. Good God, the score to this movie (composed by Hans Erdmann) is just wonderful. The ballet fan in me was impressed. It certainly helped retain my attention when absolutely nothing would happen for minutes at a time. Which happened quite a lot.

Avoid this movie if: You need something that’ll keep you on the edge of your seat the entire time. As far as silent movies go, Nosferatu is a whole lot of slow with a few minutes of awesome. The Kid was more compelling, and I’d recommend it over this movie if you want a more compelling viewing experience. This is a great film for having on in the background during a party, where people can come in and out, viewing the vampire as they wish.

One Response to 500 Movie Challenge: Nosferatu