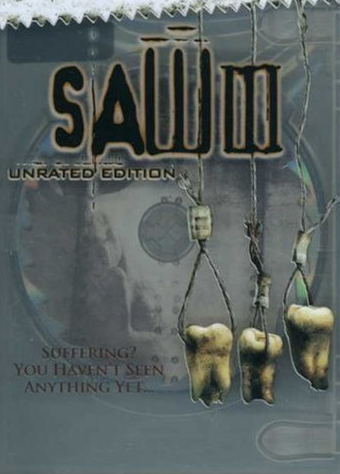 Okay, here we go. Now we’re on track. Saw III is the Saw sequel we should have had after the first Saw. This second one isn’t just a Trap Fest, there’s some real meat here.

But this movie wraps up so well, and that leaves me with a real dilemma: Do I go on to the rest of the Saw franchise? There are four more films in this party. Do I leave it where it stands? Please give me some advice in the comments, I need some frickin’ help with this. I’ve loved parts of this series, but I don’t know if I want to watch this franchise just for the sake of seeing more traps.

The gist: Jigsaw is about to kick the bucket, and he needs help. So what does his protege Amanda do? Kidnap a doctor and make her keep him alive, at least until he sees the end of one last game.

Cut to the game itself, this time being “played” by a depressed man who snapped when his young son was hit by a drunk driver. He can’t cope, and it’s taking over his life. So he’s now being offered challenges by Jigsaw and Amanda: Take revenge on the people who killed your son die and his killer get off lightly, or redeem yourself. Live or die. make your choice.

But we don’t care about that guy. We care about the captive doctor doing what she can and Amanda going insane. But more importantly, we learn even more about Jigsaw. He’s having doubts about Amanda as his protege, because she is making inescapable traps. She’s not interested in helping people redeem themselves and potentially go on to live life better. She just wants to decide who lives or dies. And as a student of Jigsaw, this will not do.

What I “learned”: Horror isn’t screened for critics because no one expects it to be good in the first place, and Saw films invest in traps above people because they think that’s all fans want.

I’m still conflicted about whether or not I want to go forward in the series, because I’m not in this for the traps. But the traps are supposedly awesome later on, according to the summaries I’ve read. It’s moments like these that try a horror fan, action movie fans, and I’m betting even those of the Friends TV show. Do you allow yourself to be pandered to? That is the question I want to find the answer to in this challenge.

See this movie if you like: A behind-the-scenes look at what potentially makes something scary. One of the most divisive scenes for me was a sequence of clips showing Jigsaw and Amanda setting up the trap from the first Saw movie, involving two men chained up in a disgusting bathroom. I often don’t like to see the guts of overwhelming schemes or plots of villains, but I know some of you out there do. This will definitely scratch that itch.

Avoid this movie if: You don’t care about Jigsaw. I know there are definitely some Saw fans who would watch this series entirely over again just to see the traps enacted. Me, I can’t do that. I need more depth to the story, and not from the victims. Victims are fickle, as we have learned. Saw III took a great angle by dwelling on the relationship between Jigsaw and Amanda. I almost wish they had gone into it even more. But it’s definitely meant to be a drawing point, so skip this entry in the franchise if you’re all about the traps.