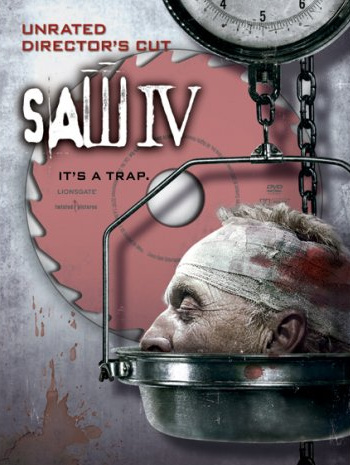 It was a big decision., bigger than I expected it to be. Which horror franchise was I going to highlight most during the Challenge? It probably wasn’t going to do anyone any favors if all I did was geek out over horror movies during this thing. Plus, any horror fan will tell you that some series are better left untouched.

So I made a decision: The series I would go into in the most detail would be the Saw series. It’s one of the most maligned series I’ve ever encountered, with an astounding amount of people refusing to see anything in the series because it’s “torture porn.” But it’s turned out to be a much more complicated series than I could have expected. There’s blood and guts, sure. But it’s also a detective story. It’s a police procedural. And as Saw 4 shows us, it’s an exploration into what being a “bad guy” really means. It sees your horror tropes and raises you one complicated, omnipotent villain. Who just wants you to learn, by the way.

The gist: Jigsaw is dead, but the games are not over. The police department that’s searched for Jigsaw all this time is breathing a sigh of relief. We killed the guy and his apprentice. What’s left for them to do? A lot, actually. Particularly when copycat traps start popping up. Examining a past trap also reveals that there must be a second Jigsaw apprentice. One bigger and stronger than both Amanda Young and Jigsaw himself.

But the most important person introduced in this movie is Jill Tuck, Jigsaw’s ex-wife. She left him when he became a crazypants serial killer, but he never stopped loving her. We also get a glimpse of why Jigsaw may have become the way he was: One of the drug addicts Jill helped at her clinic inadvertently caused the miscarriage of their child. That’s what started the chain of events that led to Jigsaw’s suicide attempt, and what led him to belief that you cannot fundamentally help anyone. They must learn to help themselves.

What I “learned”: When a main horror villain dies, you’re left at a crossroads. Do you resurrect them with magic over and over so you can keep making sequels? Or do you just end the series?

For many, the answer is for the villain to be resurrected. You have to, in order to keep people coming back “for the kills.” But the Saw series is exceptionally clever in that Jigsaw stays dead. He is 100% dead. The intro section to this movie shows his autopsy being conducted. Jigsaw is dead-dead-dead. But his legacy is what lives on, and still touches everyone around him. It’s a genius move in a genre that thrives on the cheap resurrection.

See this movie if you like: Villains with backstory. This is the movie that I know certain fans of the series have wanted since Saw 2, because it explains more about why Jigsaw does what he does. It humanizes him in the way most people want a present-day serial killer to be humanized.