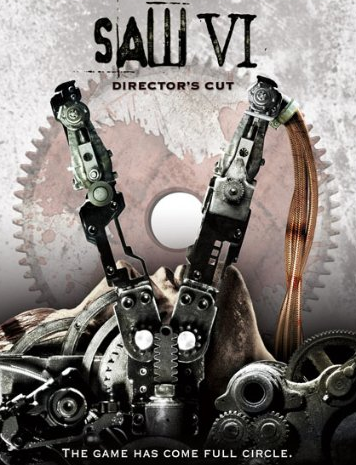 We’re coming up on the end now. The end of covering one of the most maligned film series of all time, and one of the few that you can actually brag about not being able to sit through. The guts, the blades, the abundance of screaming from people we don’t care about… it’s almost over. It’s almost the end.

Saw 6 was the first non-porn movie in Spain to receive the equivalent of an X rating. Strap in, wimps.

The gist: This movie may as well be called Hoffman Sucks As Jigsaw’s Apprentice. The police are totally on to him, because he keeps making sloppy mistakes. He’s not giving the game players enough time to free themselves. He’s being sloppy with forensic details. It’s revealed that he sabotaged past games, through Jigsaw’s former apprentice Amanda. Worst of all, he’s messing with Jigsaw’s ex-wife Jill Tuck. You do not mess with Jill Tuck.

The games are starting to wind down, and we get the feeling it’s according to Jigsaw’s wishes. Jill’s using files left to her by Jigsaw to set up the next games. Or at least she was, until Hoffman stormed in and took them like a dick. Only problem is, these games are centered around someone very close to Jigsaw’s past. Also, have I mentioned that you should never ever mess with Jill Tuck?

What I “learned”: In every Saw movie, there’s a Traps Plot and a Police Plot. The Traps Plot focuses around the players of the current game and how they’re struggling to get out of whatever traps they’re currently in. That’s the moneymaker. But the Police Plot is what hold it all together. That’s where you learn about the newest person on the Jigsaw case, and how they’re dealing with all the death surrounding them. This is also where you learn what’s going on with Jill Tuck, and how much Hoffman’s been screwing up lately. Both subplots are necessary for a good Saw movie.

Saw 6 does something that very few movies in the series do, and that is make you emotionally invested in both subplots. It helps that they’re both tied to Jigsaw’s history. But I feel that this movie should be studied as an example of how to create investment in multiple subplots at once. It’s so rarely managed. But when it is, it’s extraordinary.

See this movie if you like: As mentioned before, horror movies that manage to maintain emotional content of several plot threads. Heck, it’s hard for a movie period to do this. So it’s worth seeing just for the feat being accomplished.

Avoid this movie if: You are in it for the traps. While the traps in this movie are perhaps some of the best I’ve ever seen, it’s mostly because they play upon the emotion of all the players at hand. They’re shot in a way that’s focused on the people within them. So if you’re a major trap fan, it won’t play to your sensibility.