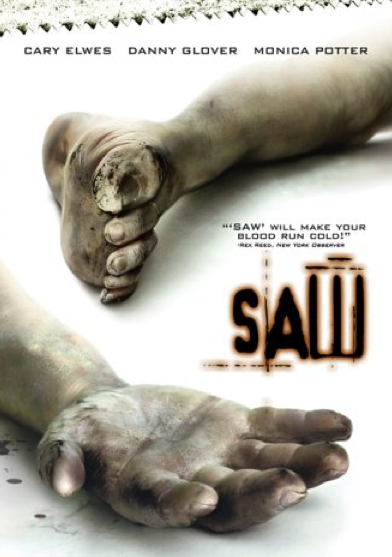 The gist: Two men, including an adorably WASP-y Cary Elwes, wake up in what appears to be a fairly large public bathroom. It’s disgusting. Really disgusting. And they’re hooked up to pipes at opposite ends of it, with a dead body between them.

They find a recorder and a tape, and soon discover the reason they are there: The serial killer Jigsaw has captured them for one of his “games.” It is a test of their will to live, and how far each of them will go to obtain their freedom. Play the game his way, even if it involves doing horrible things, and you will go free with a new appreciation for life. Fail, or even try to cheat, and the penalty is death.

What I “learned”: Holy bleep, this movie is great. And I am more surprised than anyone about that.

But it makes perfect sense why it’s a great movie. Horror only works when you care about the “victims” of the story, something that the first Saw is very good at inciting. It also shares a lot of DNA with detective films by introducing investigators trying to find and take down Jigsaw. Both of these genres rely heavily on inspiring sympathy for the victims. Despite what people say about this franchise, no one wants to see someone they don’t care about sawing off their own foot. We want to see them find the saw, dismiss the idea of sawing off their own foot outright, then slowly wear down psychologically until the only solution they can see for getting out of their situation is sawing off their own foot. That’s great character development.

See this movie if you like: Horror movies with a mysterious twist. We’re right there with Cary Elwes and his cohort: What is going on? What do they have to do to get out? We don’t want them to do anything disgusting any more than they do. So we root for them to get out, and for those cracker jack detectives to find them. We want to see how the game is played.

Avoid this movie if: Realistic gore freaks you out. The blood in this movie is pretty darn real-looking, and the screams of pain from the actors are pretty convincing. That’s part of what makes the movie perfect for fans of true crime shows like me, but is also the same kind of thing that may make people uncomfortable.

One Response to 500 Movie Challenge: Saw