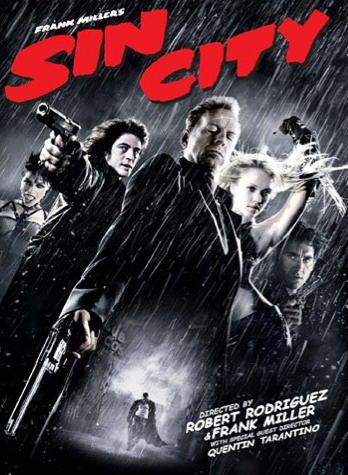 Sin City does not have a good reputation. It features graphic violence against both women and men, vivid depictions of prostitution and an unabashed love of smut. It’s notorious for having poor treatment of 99% of its female characters.

The gist: The film is a series of interconnected vignettes, not unlike Trick r’ Treat. It’s based in the fictional Basin City, nicknamed Sin City. The town is pure film noir, all black and white. There are fast cars, “dames” to be protected and plenty of hulking men with guns to do the job. Plus a few prostitute-filled militias to add some color.

What I “learned”: This movie is a work of art. It also contains the worst depictions of women I have ever seen. Everyone is sexualized; everyone has “weak moments” at the hands of men.

My reactions must not be ignored. But art is not to be judged through moral lenses. It must be surveyed through whether or not it is artistic and whether or not it is potentially valuable as art. Instead of criticizing the movie for containing sexist portrayals of women, maybe we should be asking different questions. Why are movies about crime consistently filled with sex workers? Is the death of a woman a more valuable plot device than the death of a man? Why are movies like this so successful even if we deem them improper?

With all the talk about portrayals of women in media going on, especially in the medium of video games, this has been on my mind a lot. This is the best I can come up with: Art cannot be viewed through a moralistic lens, as justified and visceral as that lens may be. There is good art and bad art. When we start venturing into “right art” and “wrong art,” we start getting into trouble. Not only do we deprive ourselves of new and potentially influential works, but we deceive ourselves into believing that all people are equally offended by all things. So we must live with this doublethink, and do our best to analyze art for art’s sake. There’s just too much at risk if we don’t.

See this movie if you like: Movies with a singular artistic vision. Sin City had two directors, and Quentin Tarantino came along as a “guest director,” But the film’s look is so unified, so deep-seated. It ranks right up there with Ella Enchanted and No Country For Old Men, and in fact may surpass them. If you’re a sucker for work by auteurs, this movie is definitely for you.

Avoid this movie if: You can’t get past the portrayals of women to the artistic merit underneath. I’m not saying people should “just get over” sexism, because that’s the direct opposite of what I believe. I’m saying that one should take pulp on its own terms, as un-progressive as they may be. Pulp fiction was born out of a time much less progressive than our own. It was incredibly influential and produced many classic works of American art. We must take it as it is, and make art that better suits us today.