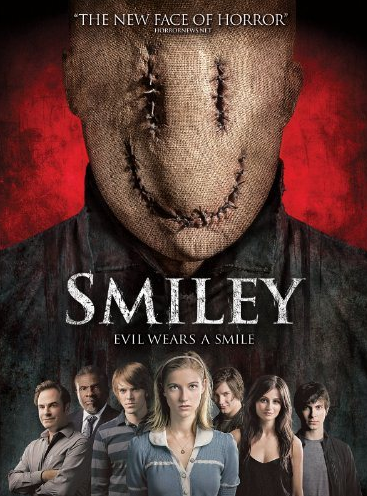 Okay, time for a “modern” horror movie, i.e. a horror movie made in the last ten years that appears to be made to appeal to the kids these days.

Don’t see Smiley. For the love of all that is scary, do not see this movie.

The gist: It started off with such a good concept. A rumor of a killer who attacks people when you type in a certain phrase three times into a chat room. “Chat room” in this case meaning the non-branded Chatroulette. People wonder if it’s real. People claim to have seen it happen.

Cut to your basic horror movie protagonist Ashley, who is so blonde and innocent you just want to gag. She falls in with a crowd of generic college kids. Except they’re also hackers. So they’re scary! They’re also part of 4chan, which I guess means they know the “real” Internet, but whatever. They all get to talking about the Smiley character, which no one believes must be real. But Ashley and her friend try summoning Smiley on the within-universe Chatroulette, and someone is murdered right in front of their eyes.

This is where the movie starts to fall apart, because Smiley supposedly starts stalking Ashley. He hasn’t been established as a figure of guilt a la Pyramid Head. It makes zero sense that he’s now stalking our impossibly innocent heroine. Who also apparently suffers from mental problems? I don’t even care. Don’t see this movie.

What I “learned”: People should not make movies about the Internet if they don’t understand the Internet. The Internet is not intrinsically scary, and at this point it’s infiltrated so much of daily life that it’s not scary because it’s mysterious. I could explain concepts like 4chan and Anonymous to my mother in a sentence. The Internet isn’t scary anymore.

Which leads me to think that the true audience for this movie isn’t younger people. It’s their paranoid parents who think that everything to do with the Internet is evil. That is what this movie plays off of, to hilarious effect. And it makes me fear for the future of the Internet more than ever. Both 4chan and Anonymous were super mad at their portrayal in this movie, and I don’t blame them. I don’t endorse doxxing or harassment, but I think they had every right to be angry. The Internet is for everyone, not just creepy people who don’t give two shakes about summoning murderers.

See this movie if you like: Horror movies you can get drunk to and laugh at. This movie’s also only 90 minutes, which is great. I wish more movies were edited to that length today.

One Response to 500 Movie Challenge: Smiley