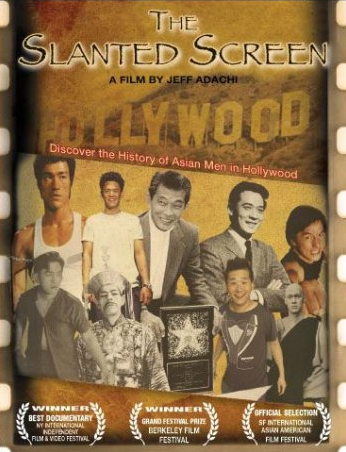 MORE DOCUMENTARIES! Seriously, there are way more documentaries making it to this Challenge than I ever expected. But I’m trying to keep it to documentaries that have been recommended to me multiple times and are considered to be well made. The Slanted Screen fits both categories. It also has the wonderful distinction of investigating an ultra-specific topic very deeply.

Hey, isn’t that supposed to be what all documentaries do? Whatever.

The gist: When it comes to American film, Asian men have had it rough for a long time. There was a golden halo of time when they infiltrated film, but wartime and pervading racist attitudes kept them out of the movies. Yellowface was pervasive for much of American history, and whenever Asians did make it to the screen they were painted as villains. But through independent films and breakout stars like Jet Li, there’s more representation of Asian men in movies than ever before. Things may actually be getting better.

What I “learned”: Man, we really have done a number on Asian dudes in cinema. Seriously. But if there’s any humor to be found in the situation… it’s because we initially found them sexy. Too sexy, in fact. There was a fear of white women sleeping with the enemy and liking it.

Ever heard of Sessue Hayakawa? I hadn’t either before watching this documentary. But that man is fine. He was a sex symbol! We forgot about him as film nerds, but it didn’t matter. Slanted also alerted me to “controversial” films of interracial romance like The Crimson Kimono and Bridge to the Sun. At least one of them will be making it into this Challenge, because they look smokin.’ After seeing this documentary, I no longer fear for a lack of representation of Asians in mainstream media. Between American men wanting to be as cool as Jet Li and American women (of all races) wanting to do Hayakawa, I think casting agents will eventually get the message. There are enough advocates to keep the representations diverse. I’m not too worried.

Seriously, part of me seriously thinks we got Harold and Kumar through the sheer force of white women’s desire for Asian men. This is the secret force social advocates never talk about.

See this movie if you like: Documentaries that are short but focused. This entire film’s 61 minutes long. That’s it! But there’s enough movie clips and interview segments that the entire thing flows intuitively. The subject is ultra specific, and no one’s looking to pad the points. Bravo, people!

Avoid this movie if: You’re not in the mood for a documentary about how the media sucks in terms of representation of a certain people. Don’t get me wrong, it’s a real issue. Millenials raise a stink about it every two seconds because we’ve seen it happening over generations. But spending two hours on the liberal side of Twitter and then watching this movie may cause one to become a bit cynical. So while I recommend this movie up and down, I suggest coming at it with an open mind. Just so the true intent of it can come across fully.