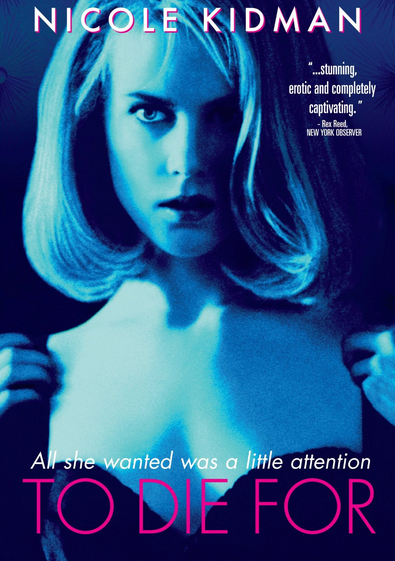 500 Movie Challenge: To Die For

My gut desire to see To Die For was entirely selfish. I had heard for a long time that it was a great movie, but my main reason for seeing this movie was that a particularly mean mentor of mine once compared me to the main character. I was young and wanted a lot of assignments so that I could prove myself. I probably came off as annoying and eager. I was probably annoying to work with. But the comparison hurt, because even I knew the implications of being compared to Suzanne Stone.

The gist: Suzanne is a wholesome, all-American girl who dreams of being the next Barbara Walters. She attends conferences and talks about dreaming big… which makes it all the more surprising when she marries a blue-collar man who helps run his family’s business.

As luck would have it, Suzanne gets a job doing the weather at a local television station. It’s a chance to pitch more news stories! She develops a documentary series about teenagers, employing local kids as subjects. But that’s when the story gets dark. Suzanne starts an affair with one of the teenagers, and persuades him to carry out the crazypants part of her career: Kill her husband, so she can get his money and not have him stand in her way to success.

What I “learned”: We still don’t know how to write ambitious women in movies without making them b*tches. This movie was made in 1995, but there’s really been little progress in portraying women who want big things. We’ve made a lot more progress on TV, but even there we’re pretty stuck on the “having it all” storyline. An overtly ambitious woman? Still pretty rare.

Ditto with women who don’t want to have children. This movie uses the fact that Suzanne doesn’t want children as “proof” that she’s a monster. There’s one scene at a family barbecue where a member of Suzanne’s husband’s family asks her if she’s planning to have children. Suzanne definitely replies no, and goes on to describe what she’s horrified will happen to her body if she became pregnant. Rude? Sure. But the “good” characters in the movie treat this rant as definitive proof that Suzanne is a cold monster that’s going to do horrible things. Just for not wanting children. That’s all.

See this movie if you like: Psychological thriller movies that actually go into detail about the “crazy” person that’s at the heart of it all. Lot of times, those figures aren’t really discussed. Rather, they’re just forces of evil to be reckoned with.To Die For actually goes into detail behind Suzanne’s schemes, and we’re all the better for it. It’s a refreshing kind of story.

Avoid this movie if: You don’t like career women being used as villains. This movie does its best to make Suzanne look like an objectively crazy person, but it straddles the line with scenes like the one at the barbeque. I’m speaking as someone who’s extra-sensitive to this in movies. Suzanne is crazypants, but she’s also trying to live the life she wants while surrounded by people who have settled for being where they are. That’s something a lot of us can relate to, even if murder is something we’d never consider.