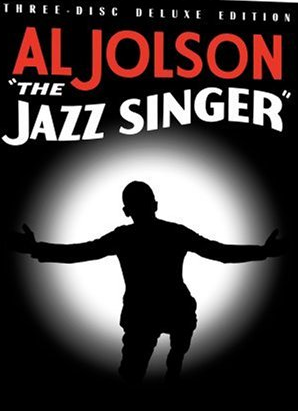 Oy vey, this movie’s complicated. If there’s one thing my liberal college friends and I know The Jazz Singer for, it’s its use of blackface. That’s literally the first thing you’ll hear about it from any college kid, or at least among the college kids who have heard of it.

It’s there. It’s blatant. But oh gosh, there are so many other non-racist things to love about it.

The gist: Jakie Rabinowitz is a young Jewish kid living in the Jewish ghetto of New York City (it’s the Lower East Side today, if you can believe it). His dad is the Cantor of their synagogue, basically the leader of the choir that sings songs of worship. But his son doesn’t want to follow in his footsteps. He wants to sing jazz music, so much that he’s willing to run away to do it.

Years pass, and Jakie is now Jack Robin. He’s doing swell, and comes back to New York to star in a Broadway show. His father rejects him once again, despite his mother’s protest. But what will Jack do when his father suddenly falls ill? He’s forced to make a choice: Sing in his father’s place on the holy Day of Atonement, or open a Broadway show and ensure his success.

What I “learned”: This movie raised more questions than lessons for me. Not about race, though I was reminded of many of my Jewish friends’ quests to find their identity despite perhaps not having personal ties to Israel. No, for me the question was closer to home: Who does jazz belong to?

My family is full of jazz musicians. Piano players, trumpet players, singers and all. But we’re not African-American. We’re milky-white Irish, German and British. Or are we “allowed” to participate in jazz and ragtime culture because we are one the families who performed it through history? Or like many Americans who play jazz in concerts and hotels, are we taking over a genre that didn’t belong to us and making it milquetoast?

Call me a liberal, but at this point in my life musicals like The Music Man and have become secret pleasures to me. I love the music in these shows. But they’re nothing compared to Nat King Cole, Big Mama Thornton or even Nina Simone. It feels so watered down compared to the “original” stuff. But I will not suggest that only black people should perform jazz music, because then we get stuff like blackface cropping up again.

I don’t have an answer for who owns jazz anymore, but I’m glad this movie made me think about it again. At least I can say that my family used the Buddy Holly approach—they played jazz in clubs and on street corners, and had a poor enough background to keep it real.

See this movie if you like: Movies that address family conflicts in a complex and interesting way. Jackie is torn in a very real way between his loyalty to his faith and family and his ambitions as a singer. He wants to be everything to everyone, and he can’t. This is a far more relevant issue to most people I know personally today than most things I’ve seen in a musical filmed in a few decades after The Jazz Singer.

Avoid this movie if: You’re tired of musicals set in show business settings. Most people that came to be fans of musicals in the 200s that I’ve met fell for them mostly because they were treated more like Broadway shows: Real life that happened to be set to music. Lots of the earlier film musicals, like this one, had to have the movie or theater scene set up around the plot by way of excusing the singing.

Otherwise, I can’t name a reason why people shouldn’t see this movie. Sure, there’s blackface in it, and that’s weird. But it weirds out the Orthodox Jewish characters too, which is so snide you can’t help but smile.