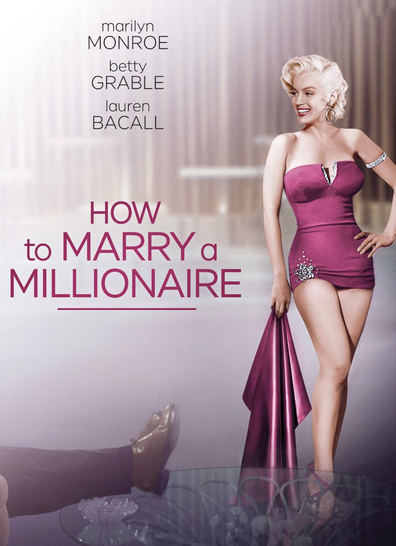 500 Movie Challenge: How To Marry a Millionaire

Thank goodness this isn’t a musical. Thank goodness. Marilyn Monroe is super talented, and I’m a musical fan. But I am now starting to see why people get super tired of musicals. It would have been so easy to make it one. But no, How to Marry a Millionaire is not a musical. It is super-awesome people being witty and keeping it real.

The gist: When I wrote keeping it real, I meant that these people are freaking crazy and devious. Lauren Bacall is the head of a trio of friends that are all models. The other two are Betty Grable and Marilyn Monroe (in a funny but non-stupid role, for once). The ladies have one mission: Marry millionaires.

They all have various reasons, of course. Marilyn Monroe sees it as the sensible thing to do. Betty Grable visibly enjoys toying with men, and isn’t afraid of looking like a spoiled brat. But Lauren Bacall’s reason is much deeper: She married a poor man once, and he turned out to just be a bum. If you have to get married, do it smartly. Or at least get as much money as you can out of the deal. But the scheme starts to go sour when their desired grooms prove to be different than they originally assumed—over and over again.

But it’s all okay, because they’re 1950s women on a mission. They’ll wear diamonds while their furniture is being sold off. Whatever. They’re fabulous.

What I “learned”: Whoever says romantic comedies can’t be compelling and interesting is out of their mind. Millionaire is supposed to just be a fluffy little movie about women trying to make it big through the right hookups. But there’s some seriously interesting moments where people talk seriously about love and relationships. People speak in barely-veiled ways about their disdain for their wealth-valuing society. Plus, Marilyn Monroe can create chemistry with a paper bag. It’s all in what you’re looking for when it comes to these things.

See this movie if you like: Gentlemen Prefer Blondes, or any movies that take on female friendship in general. Sure, the material is fluffy as all get out. It also all has to do with snagging men. But these women treat their bonds seriously. You have to, in a ruthless world where a girl has to get married if she wants any bit of money in the world. Girlfriends are necessary is such circumstances.

Avoid this movie if: You can’t get past the super-dated plot. Sure, there are plenty of women who actively try to date rich men so they can afford their super-expensive New York apartment. But that largely doesn’t exist anymore. It’s not 1953 anymore, and women have more options for making their own wealth than ever before. This will feel dated to anyone with a drop of feminist blood in their body. It doesn’t make it less good of a film, but it shows its age more than other Golden Age films.