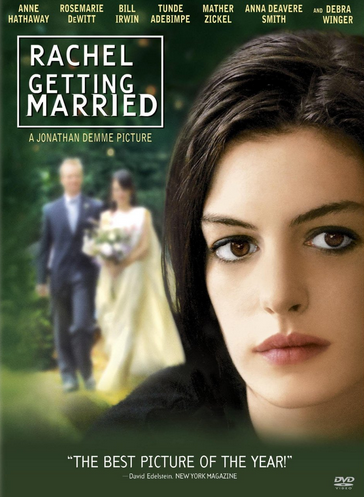 Man, archetypical Crazy People can make for great movies. It’s a mean assessment, yes. But people go to the movies for escapism, and it seems like a lot of us would really just like to be crazy for an afternoon. Rachel Getting Married was nominated for a mess of awards, and I feel it’s partly because it’s the most realistic story about a crazy person that had come around for years. This was 2008, same year as WALL-E and The Dark Knight. Quiet, insidious weirdos were in.

The gist: Rachel is getting married, and her sister Kym (played by Anne Hathaway, who was nominated for awards over and over for this part) is coming home to see her. Namely, she’s coming home from drug rehab.

To simplify it vastly, Rachel is the perfect child and Kym is the f*ck-up. While Kym was modeling and getting high, Rachel was just trying to grow up with little resentment for her sister taking up all of her parents’ attention. But after a tragedy that happened directly at Kym’s hand, there was no more avoiding it. Their parents divorced, and Kym entered a cycle of rehab and relapse. It was all about her, and it seemed it always would be.

But now Rachel’s getting married, and everyone seems happy to make it all about her for a change. But Kym senses the discomfort with her in the midst of all this put-upon happiness. At one point, she nicknames herself “Shiva the Destroyer.” But is confronting these issues the right thing to do, so close to Rachel’s special day? Maybe squashing it and putting on a happy face really is the best decision sometimes.

What I “learned”: The most scandalous things a movie can be about are things that actually happen. There are movies that try to shock through fantastical elements, and those are great movies. But Kym’s addictions and Rachel’s struggle for normality are both completely understandable. They’re both rendered real enough for you to be able to care about them. That’s scary. We typically don’t want to deal with things like addiction and denial in real life. They’re too scary. They’re too close. This movie’s great because it sees that real-life awkwardness and pushes you ever closer to it. It’s realism at its best.

See this movie if you like: Movies about families that don’t feel overwrought. There is genuine caring among the members of this family, and that’s why they try to squelch all the drama that rides beneath. They squelch because they care. They don’t want people to fuss over them. No one’s throwing plates and calling each other an embarrassment to the family name.

Avoid this movie if: You’re sick of wedding movies. This film’s better than most, but it does go into deep detail about how each ritual of the wedding affects everyone. So if you’re not into actual weddings, you might want to rethink this one. But the story of this family is so delicious, I would hope that you’d still give it a second look.