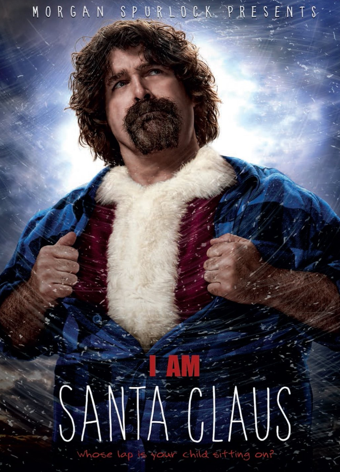 500 Movie Challenge: I Am Santa Claus

Merry Christmas! Well, almost. It’s wintry enough out there that we can still be thinking about Christmas. So I decided to indulge in the most Christmas-y documentary I could find. Produced by a professional wrestler, no less.

The gist: I Am Santa Claus follows four-ish men (some are highlighted more than others) who all play Santa Claus at Christmastime. They do it at malls, private parties, and pretty much anywhere that will take them. There are entire conventions of Santas, all doing their best to do right by the children who sit on their laps.

As it turns out, there’s plenty of drama in the lives of most Santas. They typically have other jobs, some of which are more stressful than others. They feel compelled to represent Santa Claus in their personal as well as public lives, whatever that means. As Mick Foley learns, it takes a true desire and commitment to becoming Santa, even if it’s only for a few weeks out of the year.

What I “learned”: Most of the Santas are very old, even though there are a few younger men in there who love doing what they do. Among these elderly men, there’s an incredible disparity between the ones that are successful as Santa and the ones that are not as much (at least on camera). the ones that are the most successful as Santa are usually the ones that also have the most stable home lives. They’re the ones who have their own homes, or somewhere stable to live as well. They’re the ones with concrete plans for the future. It’s just very interesting to see the difference. These mens’ happy portrayals as Santas appear to be very closely tied to their happiness levels in other sections of their lives.

See this movie if you like: Human portrayals of people in interesting positions. If I had to compare this film to a non-documentary form of media, the closest comparison I would make is to Dirty Jobs. It was fascinating to see what other jobs the Santas hold during the year. or even more fascinating, the lack of work they may do outside of Christmas. Santas have to hustle to keep doing what they’re doing! There’s competition, brokering and even massive disparities between Santas when it comes to pay and benefits. It really is like any other job. Except, of course, for the fact that everyone who bothers trying to do it does it with incredible passion.

Avoid this movie if: You don’t care for straight-up documentaries. There are plenty of documentaries that push the boundaries in regards to the format, but this isn’t one of them. In my opinion, this is totally fine. I personally don’t need a documentary with an unconventional format more than I need an interesting subject. Just lock yourself into a formula and hang on, I don’t care. But it’s worth pointing out for those who like to log into Netflix and mainline documentaries for five days. In other words, people who are like me in college.