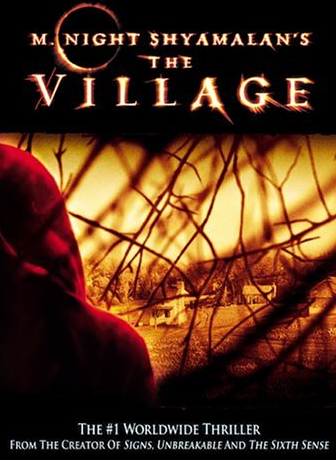 7 Movies in 7 Days: The Village

I won’t lie, I needed a pallet cleanser after Akira. Something light and fluffy. So instead, I picked a movie that is universally reviled. A movie considered so bad, even Ebert hated it. I speak, of course, of The Village.

This movie’s intrigued me for such a long time, because literally everyone I’ve talked to who’s seen it considers it one of the worst movies they’ve ever seen. It is close to universally hated in my friend group. Not even in an endearing way, a la The Room. Everyone hates this movie. So I had to see it.

The gist: A bunch of people live in a village, wearing Little House on the Prairie dresses and speaking in Fake Amish. This is immediately troubling, and one of many problems the film has with setting. How do people presumably living in the 1830’s know what a tomboy is? Why are there allusions to ADD when referring to the spastic kid, as opposed to just writing him off as crazy? And how do their houses have modern crown molding?

The villagers stay inside their meadow fantasy land while creatures referred to as Those We Do Not Speak Of roam the outside. They don’t cross into the meadow, and the villagers don’t cross into the woods. Fair enough. Until, of course, an idiot from one side ventures too far, and the lines become blurred. Scary noises ensue. But the real plot begins over halfway through the movie, when Emo Romantic Lead falls prey to a crime of passion, and his blind Mary Sue Romantic Lead must head into the woods to get medicine from the outside world. Insert classic M. Night Shyamalan twist here.

What I “learned”: There’s no such thing as bad movies. There are only incomplete movies. The Village is an example of a movie that could have been brilliant had the director known where to place the focus. The Mary Sue Romantic Lead (played by Bryce Dallas Howard) is a great character, and the scenes of her navigating the dark woods as a blind person are stunning. If that had been the entire movie, it would have been fantastic. I would have been thoroughly satisfied with a dark, cultish take on Little Red Riding Hood.

Instead, this movies spends 75% of the time building up the relationships of people we barely see again. I don’t care about Mary Sue’s whiny sister and her hipster wedding. The good moments between Mary Sue and Emo Romantic Lead don’t take place until at least half an hour in. Even then, we don’t believe it.

What boggles the mind is that Sigourney Weaver and Brendan Gleeson signed on for this movie. Adrian Brody is the spastic character with Fake Amish ADD. Did these talented people know that they were making a piece of disjointed schlock? Does anyone ever realize during the process of making something that what they’re making is trite?

See this movie if you like: Films you can pause and say, “See? That’s an excellent example of [type of shot you read about in film school].” I imagine this is also a great movie while under the influence.

Avoid this movie if: You’re a fan of actual thrillers. This movie claims to be a scary thriller, but it’s not scary in the least. It’s a victory when you feel the slightest sense of dread when it comes to Mary Sue.

One Response to 7 Movies in 7 Days: The Village