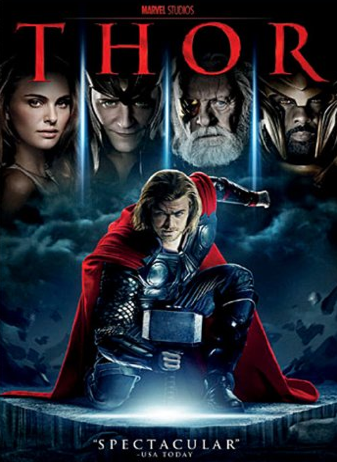 This movie’s ridiculous. This movie is friggin’ ridiculous. But if you enjoy seeing superheroes fly around and be dumb, and you want to see some excellent CGI, then you will thoroughly enjoy Thor.

The gist: Thor and Loki are brothers. They are also gods, in the above-Earth realm of Asgard. Thor is the favored child, and is set to become the king of Asgard after his father. But thanks to an invasion from Blue Non-Consequential Baddies, Thor is exposed as a hot-headed dick who’d rather make unnecessary war than be humbled. When Daddy sees this, he banishes Thor to Earth sans powers and Legendary Hammer. It stays in the ground, an emblematic Sword in the Stone.

Loki is made interim king when Daddy goes into a temporary Snow White mode (which I completely buy, that strikes me as a total Norse God thing to do). Loki takes measures to keep Thor out of Asgard, not just to corner power but because he genuinely believes Thor is unsuited for the throne. All the while, Thor is stumbling around on Earth and learning about love from a tragically-simplified Natalie Portman character. Her “love” for Thor is utterly fake, and her interest in Asgard as a scientific hypothetical is much more interesting. But apparently her fake-love for a hunky god is much more interesting than her work as one of only a few female scientists in the Marvel universe. Broads, amirite?

What I “learned”: This movie’s completely ridiculous, but it’s also proof that people will still pay to see fantasy films. So… yay? But this movie is also emblematic of how much a monolith the Marvel series has become. There were so many Easter eggs in this film, I couldn’t believe it. Just everywhere. It’s come to the point where I don’t know if people can genuinely enjoy these movies if they aren’t Marvel fans. We shall see.

This movie also confirms my beliefs that favoritism in a family is one of the worst things that can happen ever. Loki only does evil things because his family has been sh*tty to him his entire life. He becomes drunk with power when he has it because he’s had exactly zero sway in the family before this. Thor is and always has been the golden child. Even at a critical moment near the end, when Loki explains everything he has done and is pretty much begging his father to love him, he is still turned away. And then they act all surprised when he does something else “evil.” F*ck this family. F*ck Thor.

See this movie if you like: Ridiculous costumes, Easter eggs galore, and Chris Hemsworth being the next Absolut Hunk. Also if you ever plan on seeing The Avengers.

Avoid this movie if: You never plan on seeing The Avengers. Also if Captain America is also your favorite Avenger (represent!). You will be so freaking frustrated with the crazy fluffiness and CGI backgrounds.