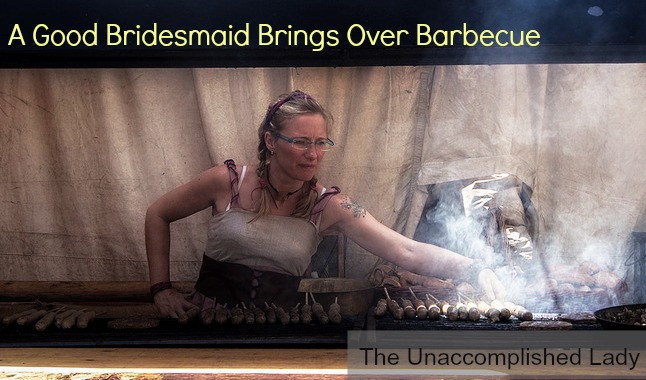 A Good Bridesmaid Brings Over Barbecue

There is an inevitable moment when you are a member of a wedding party. It’s where something goes wrong, and you have to do damage control. Also, it’s usually in the last few weeks before the wedding. You know, when stuff starts getting real.

It’s in this moment when you have to spring into action. You have to pull something out from within yourself and just go over to attend to the main couple’s needs. You have to bring over the barbecue.

My barbecue moment involved actual barbecue, but I’m realizing that this moment is pretty much inevitable in all weddings. My plan to go out with the main couple fell through because… unsurprisingly… they were exhausted.

It was two months before the wedding. Stuff was finally getting real. The stress levels were hitting the highest peak thus far. They were pulling out, at the expense of my plans.

I could have become mad and been snarky about their commitment to me being broken. I would have been well within my rights. I had ditched another event early to hang out with them. And they don’t exactly live close to me.

A good bridesmaid picks up barbecue from the place down the road and brings it over to the stressed-out couple. So that’s what I did. Dickey’s is a godsend in situations like these.*

The idea of “bringing over barbecue” is pretty much just attending to the couple’s needs above your own. Yes, plans get canceled. But members of the wedding party really have no idea what the main couple’s going through. They have no idea how many people are calling them every day to ask about the stupid stuff. Unless they’re family, they don’t know the full network of relationships the couple’s dealing with. They’re likely not confirming details every week. Then, of course, fielding opinions about those details at every turn.

Which is why it’s so important to bring over the barbecue whenever you’re needed. Don’t lose yourself, of course. If you can’t make some event or genuinely don’t have it in you to do something, don’t do it. Take care of you first. It’s a wedding, after all. Weddings are a marathon, not a sprint. Even if they’re really elopements.

But a little bit of unselfishness goes a long way in a wedding. Ditto with a little flexibility. Bridesmaids and ushers are the support class of a wedding: They seem to be very limited, but they really have the potential to help everyone succeed.

What’s one unexpected duty you had to do as a member of a wedding party? What do you wish your friends had known to do during your wedding or commitment ceremony? Tell us in the comments!