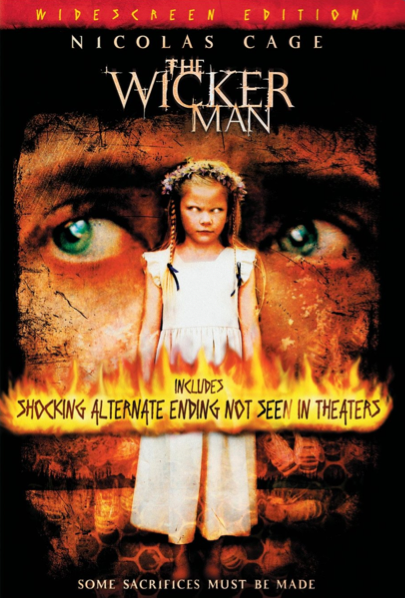 Are you really surprised that I watched The Wicker Man? I watched The Village for you people last time, we have to keep the schlock quotient up to a proper level in here.

The gist: Nicholas Cage plays a police officer with a terrible fake accent who is traumatized early on in the film because Nicholas Cage. He soon becomes obsessed with a case of a missing girl from a small, pagan community off the coast of Washington. Not just because she resembles the girl who died in the Super Important Traumatic Event, but because she’s the daughter of his ex-fiancee (played by the hippie-gorgeous Kate Beahan).

Here we have the one way this film stands apart from The Village—we have a reason to care about the people at hand. The folks in the weird town turn out to be neo-pagans who use men only for breeding purposes. Nicholas Cage responds by being blatantly sexist, and saying that they’re still susceptible to the laws of a “normal” (i.e. male-dominated) society. He later is revealed when he finds out the missing girl is his daughter, which apparently permits him him to break a half dozen laws and punch several people in the face in pursuit of getting her back. It’s the Liam Neeson Rule.

What I “learned”: Holy cow, Nicholas Cage is not the worst part of this movie. He actually sinks deep into the role of a melancholy police officer and takes it seriously. And he reacts the same way any of us would if we encountered a cult-like group who didn’t get how police worked. A few funny-sounding screams, sure. But he is not completely deplorable. One must never assume.

The movie is a lot like The Village in that it makes an honest attempt at creating an isolated area. It does it better, I have to say. But it fails in the same way in that it over-complicates the world at hand. An agrarian village with hardly any men and full of people who won’t tell the hero anything about themselves is scary enough. You don’t have to complicate it with odd speech patterns and ambiguous ties to modern technology. Nor do you need scary whisper-noises to signify that conspiracies abound. The ambiguous bee swarm sound at the end of the film would have been fine if it were sprinkled throughout the film instead.

See this movie if you like: Movies that follow their genre by the beat. There are so many horror tropes in this film that it’s laughable. It could easily used as a teaching tool for people looking to get into horror.

Avoid this movie if: You’re expecting a scary movie. Because as much as it may try, the 2006 remake of The Wicker Man isn’t scary. The original British version may be, not least because there actually is a creepy agrarian-pagan tradition within that culture. But this is more of a mystery than a horror no matter how much it tries. And no shame to anyone who finds it funny instead.