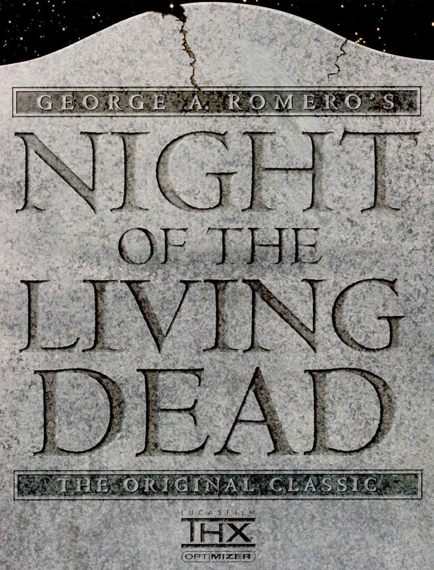 We are finally at the end of the 30 Day Challenge! Oh boy, it’s been a trip. I’ve learned so much about movies, planning big things, and prioritizing things in general. I can’t wait for the 500 Film Challenge, because  can only imagine what I’ll learn from that one.

Yesterday, I posted about something new. Just to put a bow on the Challenge, you know? Today, to look forward, I close something classic: Night of the Living Dead. The original modern zombie thriller.

The gist: A young girl and her brother go to a graveyard to put flowers on a grave. A zombie (who is not a decaying mess, it should be noted) attacks the pair and kills the brother. The girl runs hysterically to a house and locks herself in. She soon finds two things: A half-eaten corpse, and a kick-butt dude named Ben with a gun.

Ben knows what’s going down. He boards up the house, lights fires to keep the zombies away, and later build plans for escape with people he finds hiding out in the cellar. They all become an unlikely team, arguing about how to fight the zombies while barely trusting each other.

Also, did I mention Ben is black? That’s right, a black dude is killing zombies and coming up with only legitimate plans in a horror movie. It’s awesome!

What I “learned”: This movie didn’t blow my mind at first, just because I’ve seen enough zombies to know the basics of how to kill them. That didn’t really shake me. What blew me away was the year this movie was made: 1968.

You know, the year the original Planet of the Apes came out. The year MLK was shot, and Star Trek showed an interracial kiss on television. My Lai went down, and we had a photograph of the Earth.

This movie is a frickin’ revolution. Bigots are painted as fools, black dudes save the day, and zombie children kill their parents. How did this movie get made? And could it have been made if it wasn’t horror? Probably not. You take a story and set it in impossible circumstances, and all bets are off. It’s horror’s true superpower: If done right, it chucks out all the rules.

See this movie if you like: Slow-moving horror movies. Not to say that this movie is slow and boring—it’s just emblematic of a time when horror wasn’t so wham-bam. Enough is happening throughout the movie that you’re entertained. You just have to be prepared for more conversational dialogue and violence shot farther away from the action at hand. It might frustrate diehard fans, but it’s an opportunity for newcomers to the genre to sink into something comfortable.

Avoid this movie if: You need a strong female character to carry you through the movie. Mrs. Cooper is pretty great as the counterpart to her dickish husband, but the main girl we thought we’d be caring about the entire movie become catatonic and useless within 45 minutes. She’s kinda useless, which I say as a warm-blooded feminist. You are one hundred percent with Ben when he rolls his eyes at her Buddy Holly-level of naivete. The country’s full of zombies, lady. Get with the program.

But hey, I’m speaking from a place of privilege. I live in a culture where Michonne and Ellie kick butt against zombies regularly. Maybe she was just doing the best she can.