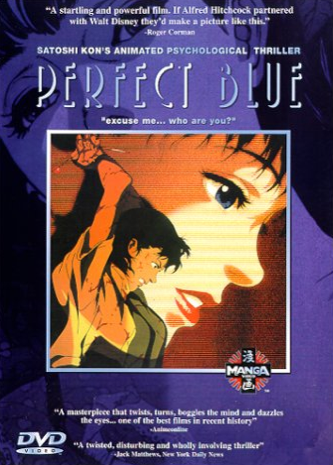 There is a contingent of people who have been telling me to see this movie. Not just because I love Black Swan, even thought they’re tied together spiritually. It mostly comes with a statement like, “Hey Brit! You like effed-up movies…”

But before I get into this movies, I wanted to share an interesting side effect of doing a longer movie challenge: Guilt. I feel incredibly guilty watching movies on a regular basis, even if it’s for a website I love and I’m planning to write a book about the experience. I’m also earning money through the Amazon Affiliate program (link leads to a weird blog post/ad for a course about it) by doing this. But even so, this entire thing feels incredibly indulgent. Thank god for gigs that indulge my harebrained ideas.

The gist: Mima is a Japanese pop star, bubbly and successful within a guise of eternal innocence. But she makes the decision to try to cross over into mainstream acting, because no one can really be a pop idol forever. I’ve been told this is pretty normal for pop idols in Japan. What is probably a little less unusual is a pop idol’s first mainstream role being a crazy murderer/rape victim.

So Mima’s having personal trouble working through her own transition into public “womanhood.” Understandable. But most women don’t have to deal with crazy fans of theirs demanding that they go back to being an innocent singer. Most women don’t have to deal with a website detailing the details of their day, including pictures… written by someone else. And things only get worse when Mima’s director, the show’s writer, and many other people in the show turn up dead.

Is Mima going crazy? Is her “other self” ridiculing her for her choice to cross over real? Are her crazed fans right?

What I “learned”: The entire world has a Madonna/Whore Complex. Every country values virginity in weird and disgusting ways. But Japan is by far the most blatant about these issues.

See this movie if you like: Weird, mind-bendy movies. But that’s a bit of a cop-out. This movie is also freaking bloody. Also, you shouldn’t avoid this movie if you don’t know very much about Japanese pop idol culture. It’s pretty easy to pick up on.

Avoid this movie if: You find Japanese culture incredibly twee, or if you just aren’t interested in anime. No judgement if you’re not into it! I’m not a true fan myself. If I find something I like, I really like it. Perfect Blue may be the first anime (show or film) that I’ve truly been ambivalent about, maybe because it feels more like an cross-genre film than any other anime project I’ve ever seen. But if you can’t suffer through the cute aesthetic that comes along so often with Japanese film, this won’t be your speed.