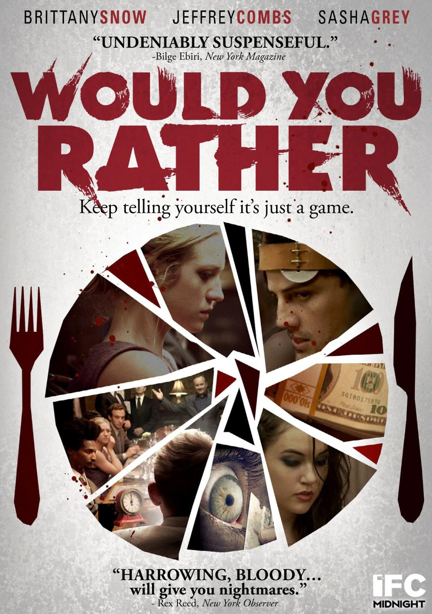 Are you a fan of Clue? How about dinner parties? Or better yet, you want to see people trying to be evil but really just coming off as elitist?

Would You Rather has hit me at a very interesting time in my life. Having watched the world economy collapse from my university, I learned early on how to hustle. I modeled, sold blood plasma, and basically did what I had to do to survive. Not just survive. I did what I had to do to feel like I was a normal college student. Not one who had to rely on financial aid just to be there.

Hence why this movie struck me as interesting. It bills itself as a kind of Saw ripoff, testing the boundaries of human evil. But it actually asks a deeper, much better question: Is it even worth it to try to be good?

The gist: The movie starts by painting a generic picture: A Millenial-age woman named Iris (played by Brittany Snow, also one of the producers) has left college to care for her younger brother with leukemia. Work’s tough to find, because it’s 2012 and sh*t happened. But then her brother’s doctor offers her an out: Play a game at his mentor’s annual dinner party, and have her brother’s treatment taken care of if she wins.

Sounds pretty cut and dry. But the game turns out to be Would You Rather, enforced by guards ready to shoot you if you refuse to choose. Iris and the other dinner guests are forced to hurt others and themselves, proving how far they would go to get the money necessary to “fix” their lives.

What I “learned”: My favorite part comes near the end, wherein Iris is forced to make a pretty clear-cut moral decision. Without giving spoilers, the choice comes down to doing the “right” thing and gaining nothing, or doing the “evil” thing and getting rewarded. With very little thought, Iris does the “evil” action.

This action doesn’t feel untrue to Iris as we’ve come to know her as a character. In fact, it’s the truest moment there is. Iris is convicted in this moment that she is willing to pay the price for her brother. Her personal values are set, and she won’t be persuaded to betray them. That’s really all you can ask for in life: Personal values that are just yours, that you can stay certain of for life.

See this movie if you like: Character actors having fun in a “weird dinner party” setup. Eddie Steeples (Crabman from My Name Is Earl) came to play in this movie as his trademark Charismatic Black Dude. Sasha Grey comes as a self-interested young woman who’s all about the Benjamins, and I really would have loved to see more of her before one challenge went too far. These actors were handed a weird script, but they all tackled it with dedication. That’s always fun to see.

Avoid this movie if: You like real gore. I won’t beat around the bush, this movie is not nearly as gory as it’s supposed to be. If someone really slit their own eyeball (it’s on the poster, ergo not a spoiler), I’m willing to bet there’d be more blood than just a slow trickle. The evil dinner party host is portrayed way too human for the audience to really believe he’s evil. Jigsaw or Hannibal he is not. He’s more like the objectivist Andrew Ryan from Bioshock. At least he would be, if he wouldn’t acting so freaking friendly.

The movie’s also quite short, so you can’t even indulge in slow, ridiculing torture a la There Will Be Blood. So unless you’re in training for a Saw movie or feel like watching Crabman whip a white dude, I’d advise horror fans to give this a pass. Casual fans, feel free to partake.

One Response to 30 Movies in 30 Days: Would You Rather