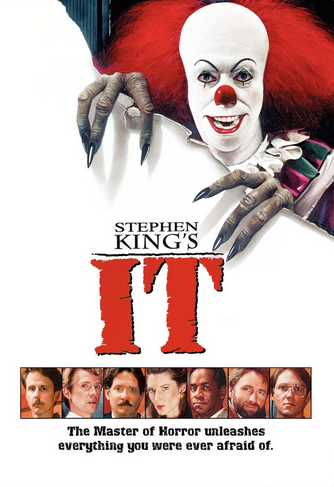 Another classic movie, another history of originally being shown on TV. It’s amazing how common this is! But yeah, Stephen King’s It originally premiered on TV. Was there a golden age of television that I just missed by virtue of being a child? If so, this needs to be remedied.

The gist: A band of seven kids band together and become friends, not least because they’re also the biggest social outcasts in their school. One of them’s fat, one of them stutters—anyone who went to high school will understand why this kids are instant best friends. They are “the Losers Club,” and it is the 1960s. Life is great.

One of them has a dark secret, however: His little brother is one of the victims of the child murderer that’s starting to make the news. He harbors guilt about his brother’s death, for sure. He acted like a typical older brother and pushed him away. But that quickly fades when they see the killer face-to-face. They soon realize it’s not a person at all, but some kind of magical being. It has shapeshifting powers. It is ancient. And it wants their blood above all.

With surprising ingenuity, the kids put down the monster they call It. Startled and wary, they all promise to come back and fight It should it ever return. Because you know, grownups can beat anything.

What I “learned”: Friendship must be the hardest thing in the world to write, because it holds up so many movies but rarely feels authentic. This one works better than most I’ve seen, just because it shows how people stay together even when it looks like they hate each other from the outside. They’re all just scared of It, and are smart enough to see that in themselves.

See this movie if you like: A nice presentation of platonic friendships between men and women. I can say that the experience of being the One Female Friend in a group is a weird experience, especially when you’re a teenager. It’s weirdly sexual, even if you don’t have a crush on anyone. Everyone has a chance to act out their Damsel and Rescuing Knight. When you’re accepted by the boys as an equal, it’s the best feeling in the world. All of these little moments of that experience are represented with Beverly and the boys. It’s a treat to watch.

Avoid this movie if: Child death is a constant theme in this book, so avoid this movie if it’s a big trigger for you. I know “trigger” is making some of you roll your eyes right now, but I speak seriously. There’s lots of people who can’t watch anything concerning child death because of something that happened in their lives. This is touched on in It with frequency and gut-wrenching detail. So take heed.