500 Movie Challenge: The Thief and the Cobbler 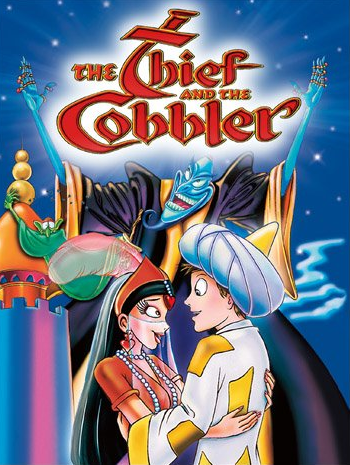 How do you solve a problem like cult animation films?

No, I’m serious. What do you do with a film that’s considered great but is pretty much lost to time?

Here’s your answer: you track it down and you watch it like the pretentious little film hipster you are. You just have to pray that you like it after all that trouble.

The gist: There’s a beautiful kingdome out in the middle of the desert, named Baghdad. That Baghdad? Oh yes, that Baghdad. We’re in for a new kind of fairy tale, kids.

Anyway, ruling over Baghdad is an elderly king and his lovely daughter. After the obviously-evil sorcerer Zigzag (voiced by Vincent Price!) threatens to behead a lowly cobbler for accidentally tripping him, the Princess steps in and employs him to fix her shoes. Copious flirting commences.

Meanwhile, Zigzag is plotting to take over the kingdom and make the Princess his bride. Part of that plan involves joining up with the perpetually invading of One-Eyed Men. The other part is stealing and hiding the three great Golden Balls kept high above the city. They maintain the kingdom’s peace and harmony, which is why the Thief is aiming to steal them away…

What I “learned”: First of all, props to The Thief and the Cobbler for portraying a Middle Eastern city that I actually believe. There are veils on the women and a sitar bridge in the introductory song. That’s great stuff. I want more movies like that.

That being said, animation is so weird because there are just as many moving parts as in a live-action movie but far less slack if one part is more lackluster than the others. If one actor’s performance is bad in a live action movie, the other actors can probably carry their performance. It feels more nuanced because you’re dealing with real people. I can’t explain why, but it does.

This is all to explain my stance that the Thief is the worst part of this movie. Which is a shame, because he should have been the best. I saw what I believe to be the Miramax version of this film, which I think should be rename The Version Where The Thief Doesn’t Shut Up. Every instance of Chuck Jones-style physical comedy is ruined by the Thief yakking his head off. It’s such a shame! So do yourself a favor and track down the Recobbled Cut, or any other earlier version of the film. It will save you from mind-numbing frustration.

See this movie if you like: Beautiful animation that is made with adult viewers in mind. This movie isn’t risque, but the art style isn’t simple in the way most “family friendly” films tend to be in. Not that that’s wrong, necessarily! It’s just nice to see an animated film not be afraid of making you trip out while watching a chase scene.

Avoid this movie if: You can’t get one of the original versions. Seriously, save yourself the agitation.

One Response to 500 Movie Challenge: The Thief and the Cobbler